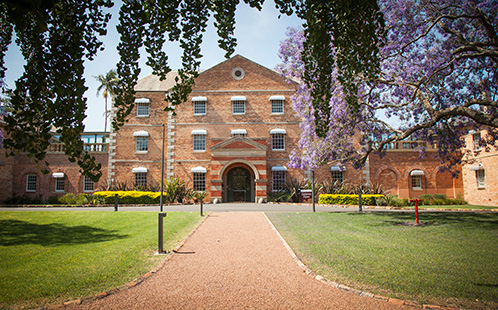 November is a special time in Sydney, as the city skyline is awash with glorious jacarandas in bloom, and there's no better place to witness the spectacle than at the historic Female Orphan School at Western Sydney University's Parramatta campus.

On Saturday 7 November the University's Whitlam Institute is throwing open the doors to the Female Orphan School for a community Open Day, being held from 10.30am until 3.00pm.

There will be guided tours of the building throughout the day, as well as exhibitions, activities for the kids, and the added bonus of taking in the magnificent old jacarandas that grace the front entrance to the building at their colourful best.

"Our Open Days are some of the most highly anticipated community events on our calendar. We just love being able to throw open the doors of this grand old building and to welcome all comers – young and not-so-young – to share in the beauty of the place.

"It's never more striking than in November when the jacarandas are in bloom and the gardens are at their best. My own favourite is the grand old Ginkgo, a centurian of the Boxer Rebellion, that holds pride of place in the forecourt," says Mr Sidoti.

"Our 7 November Open Day will also be a lot of fun. We have put together a full program of tours, exhibitions and activities for the kids, so we encourage people to come along, bring a blanket to picnic on the lawn, and spend a little time with the family wandering through the beautifully restored Female Orphan School building and enjoying this important part of our nation's history."

The building's foundation stone was laid in 1813, and it is one of the most important surviving buildings from the earlier period of European settlement.

Find out more about the Open Day or to book a place to any of the Female Orphan School events, contact the Whitlam Institute on 02 9685 9210 or fos@westernsydney.edu.au

There will be guided tours of the Female Orphan School on the day at 11am, 12:30pm and 2pm. Tours are $10 per person, and bookings are advised as places are limited. To book, please contact the Whitlam Institute on 02 9685 9210 or fos@westernsydney.edu.au

This fascinating exhibition is on display at the Female Oprhan School's Margaret Whitlam Galleries. At 11am Victoriana Sydney curator Stephen Thompson will also deliver a talk about this fascinating era; introducing the people who transformed the bush, farms and cow pastures of Parramatta, Surry Hills, Newtown, Glebe and Ashfield into roads, streets, lanes, terraces, railways and great urban parks that most of us still navigate every day.

A Changing Australia: The time of Gough Whitlam exhibition

This exhibition will also be open on the day, and the Whitlam Institute also promises to have a few extra items on display from the Whitlam Prime Ministerial Collection to mark the 40th Anniversary of The Dismissal.

Create a toy like the children in Victorian Sydney played with, using paper, pencils and imagination

Use your imagination and a range of craft materials to create a collage that shows what matters to you.

Create a newspaper front page for the day of Gough Whitlam's dismissal. Write your own story, or use excerpts from actual newspapers from the time.