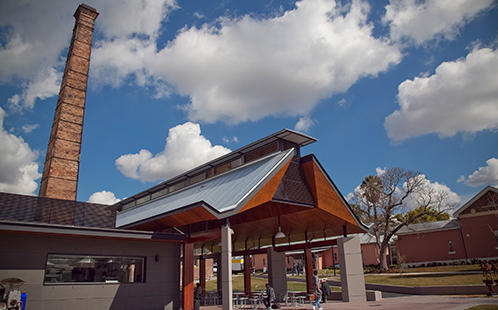 The University of Western Sydney's unique Boilerhouse Precinct is the only Australian entry shortlisted in the prestigious urban design World Architecture News Awards.

The Precinct, the social heart of the Parramatta campus, is one of just 12 urban landscape projects selected from around the world in the final stages of the WAN Awards which celebrate and promote the best in international urban design.

Alex Kibble of TKD Architects was engaged to turn the derelict boilerhouse, built in 1894, into central plaza that acts as a major food service outlet; connects all of the student centred activities on campus; and, importantly, respects the unique heritage of the site.

The adaptation of the boilerhouse, which provided coal-fired heating to the hospital which once stood on the site, includes a new pavilion referencing the form of the laundry destroyed in a 1996 fire.

After the industrial rubbish and rubble from the building was cleared, the construction team from Gledhill managed to retain much of the brickwork, including the towering brick chimney and the original coal-fired boilers.

The boilers were taken away to Lithgow, where sculptor Philip Spark sandblasted and refashioned them, and were then returned to the Parramatta campus where they now stand at the front of the building on plinths. Other components such as gauges, auto stokers, ducts and steam valves, feature as decorative pieces inside.

The hardwood trusses and rafters of the building were replaced and a new timber floor, industrial kitchen, and lantern roof introduced. Outside, rectangular granite paved areas and washed concrete paths were made to link a pavilion-style outdoor seating area to a raised central grassed plinth.

Reaching the shortlist for the WAN Awards is the latest accolade for the Boilerhouse Precinct. Previous awards include: