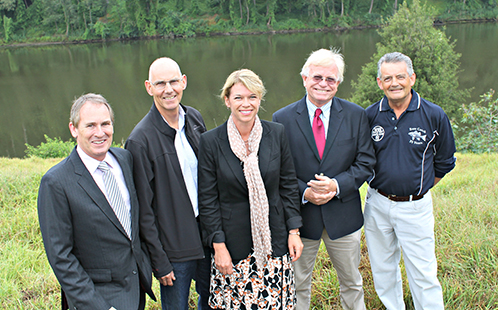 Improving the health of fish habitat along the Hawkesbury River is the aim of a new joint project between the University of Western Sydney and the Bass Fishing Club.

The ultimate aim of this project is to create more fish by restoring important riparian zones that protect the river from land based activities and provide food, shade and shelter for native fish and other aquatic life in the system.

"UWS is currently redeveloping Riverfarm as a collaborative learning space for sustainability for all students from kindergarten to university and interested community members. The new project builds upon several initiatives already underway," says Professor Tasker.

In 2014 an open day will be hosted by UWS with the Bass Fishing Club and the Hawkesbury Environment Network targeting local high schools to raise awareness of the importance of riparian zone health in supporting native aquatic species of the Hawkesbury River.

This initiative led by the UWS Office of Sustainability and the RCE-GWS will begin with undertaking re-snagging of the river, implement invasive weed management and revegetate the riparian corridor with native plant species.