Four University of Western Sydney students will have extraordinary international experiences when they embark on their New Colombo Plan(opens in a new window) Scholarships later this year.

The high achieving students were named by Minister for Foreign Affairs, Julie Bishop, at a ceremony in Canberra this week with Governor-General Sir Peter Cosgrove AK MC (Retd) to mark the inaugural New Colombo Plan Scholarships.

Jasmin Hammond, Tim Mann, Candice Skelton and Patrick Gan will study, for up to a year, at some of Asia's most esteemed universities.

UWS Vice-Chancellor Professor Barney Glover says the scholarships are a tremendous opportunity for the students to build their academic knowledge and international connections.

"The New Colombo Plan will provide our students a valuable experience which will enhance their personal and professional lives long after they return home," says Professor Glover.

"UWS is ideally positioned in one of the most culturally diverse cities in the world. Now, through programs like the New Colombo Plan and other initiatives at UWS more of our students are travelling overseas to study, forge friendships and gain a first-hand understanding of another culture."

The Commonwealth Government's $100 million New Colombo Plan (NCP) aims to increase knowledge of the Indo-Pacific in Australia and build people-to-people and institutional relationships, through study and internships undertaken by Australian undergraduate students in the region.

The four UWS scholarship recipients are among just 40 Australian undergraduate students aged 18 to 28 selected to participate in the pilot phase of the NCP in which students will study overseas for up to one year: 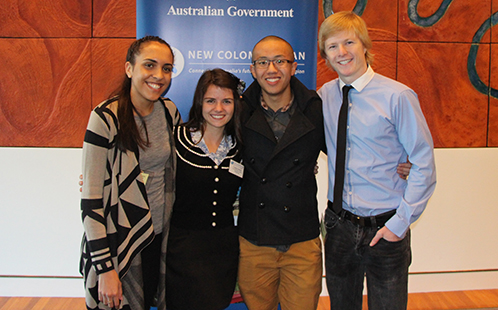