The University of Western Sydney is celebrating its 25 year anniversary in south-western Sydney, marking the journey from infancy to one of top 400 universities in the world.

In 1989, higher education in south Western Sydney was provided by the Macarthur Institute of Higher Education (MIHE), with facilities at Milperra and Campbelltown.

Following the merger of education institutions in the Nepean and Hawkesbury regions to become the University of Western Sydney early in 1989, the MIHE joined in November.

The MIHE facilities at Campbelltown and Milperra are an integral part of the University of Western Sydney, giving local students access to award winning teaching and internationally regarded researchers.

To mark the 25th anniversary of this special milestone in Western Sydney's history, UWS invited students and staff from MIHE to join an open-mike celebration to share their stories about the power of education in their lives at UWS Bankstown campus. 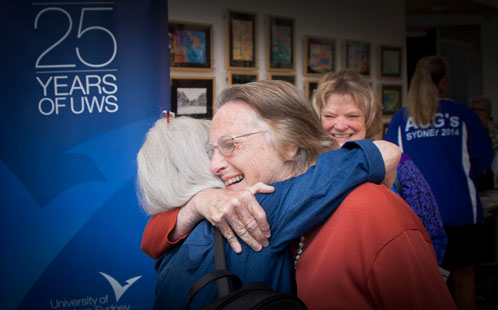 She says the university has come a long way in 25 years.

"So much has changed over the years, not least technology, and it's made such a difference to staff and students," says Deirdre Russell-Bowie.

"In the late 1980s we were introduced to cumbersome and slow desktop computers, and now every staff and student has a smartphone, iPad or laptop to enhance their learning and productivity."

Professor Robert Lee says there were only a few hundred students when he started teaching in Milperra 35 years ago.

"It was scarcely conceivable that Milperra CAE, after many permutations, would end up being part of a middle-ranking university with a growing global reputation," he says.

Associate Professor Jane Mears says it's hard to overstate how much the university has changed since 1989.

"I remember in the late '80s and into the '90s spending hour upon hour upon hour in a small, dark room photocopying book chapters and journal articles to compile up to date accessible books of readings for my students," she says.

"Now I just upload links and PDFs to the online study portal and students can access the most up to date research in seconds."

UWS also recognises the generations of knowledge held by the traditional owners of the land where our campuses are located.