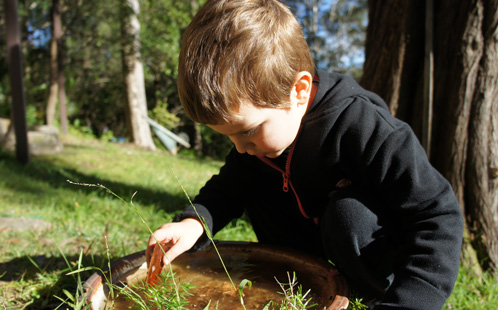 A new study by researchers at the University of Western Sydney has unlocked hidden clues about how infants learn the meaning of words, highlighting the importance of ensuring parents and carers are clear and concise when teaching children about new facts and objects.

Children are presented with new objects and experiences everyday and from an early age can connect them with words, but their understanding of how new words and expressions are linked to objects can be different from adults.

"Young children are amazing at the way they quickly gain language skills," says Dr Karen Mattock from the MARCS Institute and UWS School of Social Sciences and Psychology.

"What we wanted to do is find out more about the way children learn words so we can give parents the best strategies to teach new words to their children."

In the study, Dr Mattock and Dr Marina Kalashnikova displayed two household items children were unlikely to have encountered before. One of the items was given a nonsensical name, for example 'mef', while the other one remained un-named. Researchers then asked the participants to hand them one of the objects, using another nonsensical word, for example 'gup'.

Children aged 3-6 years and adults were able to use a process of elimination to determine the correct item, but the responses started to diverge as researchers made the test more challenging.

For example, researchers then presented two items, saying "my dog likes to play with this one", before asking participants to "give me the one I got for Christmas"- information that was not made available.

In this scenario, children again attempted to use a process of elimination to arrive at the answer, but as the descriptions were not mutually exclusive, the adults did not use the same tactic.

"What's particularly interesting about this study is that there was a really noticeable difference between the responses of the three and four year old children, as well as the adults," says Dr Mattock.

"Adults were more likely to understand that two or more facts can apply to the one item, for example you may have got the item for Christmas and your dog might like to play with it."

"These results show that as children get older they become more experienced in the way words and facts are used to both describe and communicate information about objects."

"It's so important to be clear when speaking to younger infants, especially when you describe new concepts," she says.

"When you are teaching your child the names of items or giving information about them, keep in mind that their knowledge about language is different, so make sure they are attending to you as well as to the item you are talking about, and encourage your child to ask questions."

"These quality interactions go a long way to helping your child's vocabulary and knowledge grow."