Second season of The Why Generation kicks off in August 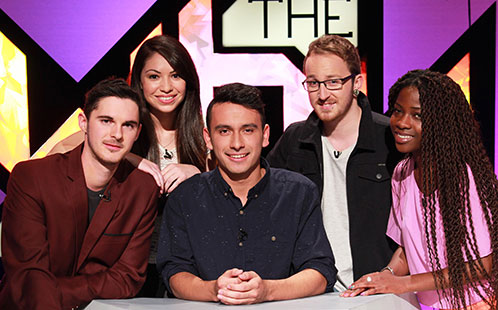 It's saucy, it's savvy, and sometimes it's just plain serious: the second season of The Why Generation will be coming to the small screen this August.

The 10-part series was created by UWS Bachelor of Communication students, and everything from pre-production planning to auditions, crew and shooting was completed in the Television Sydney studios at the station's UWS Werrington South campus base.

Each half-hour program sees second series hosts and UWS students Jake McCallum and Andrew Olivares lead their panellists through discussions of politics, sex and religion – and everything in between.

Jake, a journalism student from Emu Plains near Penrith, said the role as host seemed right for him.

"The topics, however controversial they are, are delivered with a lot of background information and educated answers," he said.

"These are the kind of hard-hitting topics that as members of the Y Generation we must bring to light and question."

Jade Collins, an aspiring model from Blacktown who has previously appeared on reality show Australia's Next Top Model, described her time on The Why Generation as a learning experience.

"I love nothing more than learning and listening about others opinions and values on topical and controversial issues," she said.

"It has showed me how much I really love working with television and has definitely ignited a passion for humanities and activism.

"I loved being on the television show, and I hope to be on it again next series and further my career in television from this."

Law student Raina Chandra, also from Blacktown, said she learned a lot while working on the show.

"My experience on the show was unreal! I met and so many passionate and dedicated individuals striving towards greatness," she said.

Television Sydney CEO Rachel Bentley said the students had worked hard to produce a series that aims to bust a few myths about today's most maligned generation.

"The students have produced a series worthy of any commercial production studio, with interesting characters, topics and discussion," she said.

"Through The Why Generation second series, Television Sydney continues its push to not only present thoughtful, quality TV content but also provide training in a working television studio for UWS students."

The Why Generation will begin broadcasting on Television Sydney (TVS), digital 44, on Thursday, August 14 at 8.30pm. It will repeat Wednesdays at 10.30pm and Mondays at 1am.

The broadcast can also be viewed online by logging onto the Television Sydney website – www.tvs.org.au - and clicking on the "Watch Now" icon at the top of the screen.

The Why Generation is rated M.