Community comes together to celebrate opening of UWSCollege Lithgow 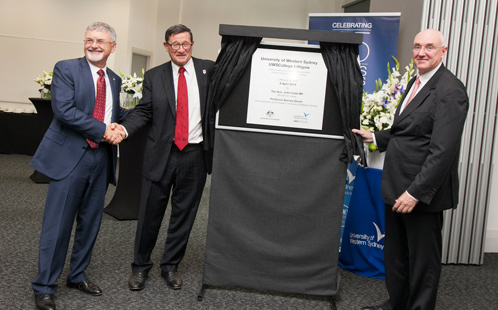 After years of planning and months of refurbishments, the new UWSCollege Lithgow facility has been unveiled by The Hon. John Cobb MP, Member for Calare.

Located in the historic Hoskins Building in the heart of Lithgow, the new UWSCollege facility began teaching at the start of this year.

Dean and CEO of UWSCollege, Dr Kerry Hudson, says the University is delighted to be part of the welcoming Lithgow community.

"We have been overwhelmed by the support we have received since we first announced that UWS would be establishing a campus here in Lithgow," says Dr Hudson.

"We are pleased to be playing a role in providing more tertiary educational opportunities for the 20,000 residents of the Lithgow Local Government Area. We have plans to enrol 100 students in 2014, and we look forward to expanding both the number of students and the number of programs on offer over the coming years."

Established in 2006 by the University, UWSCollege is having a transformative effect on students' lives and higher education participation rates, with thousands of students having successfully enrolled in and completed a UWS degree after coming through the pathways program.

UWS Vice-Chancellor Professor Barney Glover says the University is extremely proud of its UWSCollege initiative, which he says in terms of its size and scale, is unique in the Australian higher education sector.

"UWS has proven itself to be a national leader for improving access to university study for thousands of students," says Professor Glover.

"By expanding UWSCollege to even more campus locations like Lithgow, UWS is fulfilling its mission to improve the educational outcomes for the people of Greater Western Sydney and regional areas."

The development of the new facility was made possible in part by $29.8 million in funding from the Federal Government, as part of its Structural Adjustment Fund. The University has also invested $15 million of its own funds to support this important initiative.

The funding has also seen the development of new UWSCollege facilities for the University's Bankstown and Penrith campuses, and the refurbishment of the UWSCollege headquarters at Nirimba.