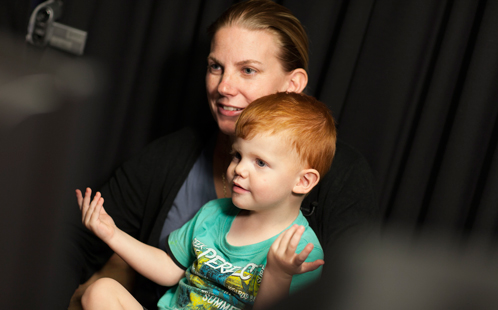 Australian babies are more likely to understand Canadians than their own compatriots, with a University of Western Sydney study finding Aussie infants struggle to understand some vowel sounds spoken in the local accent.

Research from the UWS MARCS Institute, published in Frontiers in Psychology, has found while Australian English may help mark a relaxed environment or the source of a good barbeque, it can also make it hard for babies to learn new words.

Australian English continues to evolve as it's adapted by new generations of migrants, yet the accent is still easily recognised by its distinctive vowel sounds and rising inflection.

To test the ability of Australian infants to learn words produced in different accents, researchers divided children with a mean age of 15 months into two groups, one of which listened to Australian English and the other to Canadian English.

Researchers then taught infants a new made up word ("deet") by playing them recordings of the word while showing them a picture of a new object that served as the word's meaning.

During the test, researchers measured whether infants noticed when the word was switched to "dit" or "doot", akin to an adult noticing that the word "beet" has been changed to "boot," or "bit". While the infants listening to the Canadian English speaker noticed the change in word each time, infants listening to the Australian English speaker failed to notice these vowel changes.

"Some Australian English vowels, such as the ones in "sheep," "ship" and "shoot" are very close to one another, as opposed to the same Canadian English vowels which are more distinct," says Associate Professor Escudero.

"We now know these Australian English vowel differences are not easy to learn." Associate Professor Escudero says the influence of accents can make a big difference to language acquisition.

"The Australian accent may make it a little harder for Australian infants to master some vowels, but it doesn't make a difference in the long run," she says.

"For adult migrants to Australia who are just starting to pick up the language, they may take a bit longer to master Australian English."

Associate Professor Escudero says mothers instinctively emphasize differences between vowels when they talk to babies so it remains important to try to do the same with adults learning English, as Australian vowels may be particularly difficult for new adult speakers.