Excellence and participation in Australia’s universities are not mutually exclusive 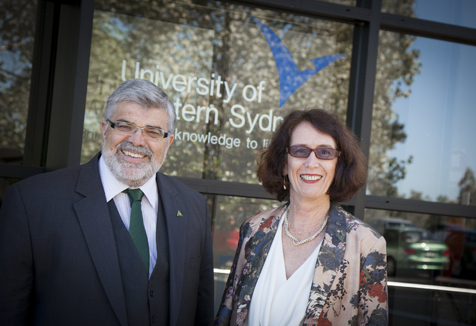 Senator Kim Carr, on a visit to UWS in March 2013, with Vice-Chancellor Professor Janice Reid

The University of Western Sydney congratulates Senator Kim Carr on his appointment as Minister for Higher Education, and says it looks forward to working with the Minister.

Acting Vice-Chancellor, Rhonda Hawkins, says the appointment of Senator Carr as Higher Education Minister and his resumption of the Innovation, Industry, Science and Research Ministry is testament to the depth of his experience and commitment to advancing key drivers of national growth and prosperity.

“While UWS has led the way in achieving the Federal Government’s widening participation agenda, major improvements in the standard of the University’s teaching and research have also been recognised in key national quality assessments."

Ms Hawkins says the rapid and pronounced improvement in the University’s research excellence in recent years has seen UWS rank 11th of Australia’s 39 universities when it comes to competitive Australian Research Council Discovery grants in 2013.

“Our excellence in teaching has also seen UWS awarded the Prime Minister’s Australian University Teacher of the Year Award for two consecutive years, 2011 and 2012,” she says.

“This has occurred while the University's student numbers have grown by over 30 per cent in the last five years. Student satisfaction with their UWS experience in the national course experience survey in the most recent round was 85 per cent, which is above the sector average.

“Most importantly the University has not lowered its entry quality cut off in the last three years to achieve this growth.

“UWS has opened up opportunities for its regional community that were not possible when there was limited potential for growth. Under the current government policy we have raised aspirations and shown students can not only achieve excellent results but go on to make much needed contributions as graduates in their local communities and in the Greater Western Sydney region more broadly. This is essential for national growth and prosperity.

“The University of Western Sydney’s ability to achieve this outcome while continuing its leading role when it comes to widening participation and giving more students with ability the opportunity to study at university regardless of their background or economic circumstance, proves that equity and excellence are not mutually exclusive. We can have both.”