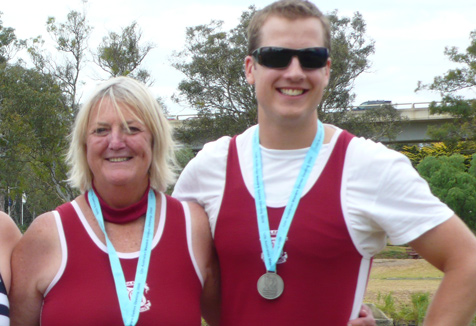 Sue Field with her rowing partner.

When the World Masters Games kick off in Italy next month, there will be a familiar UWS face competing at the regatta.

Lecturer Sue Field, New South Wales Trustee & Guardian Fellow in Elder Law at the University of Western Sydney School of Law, will be representing Australia as part of a contingent of rowers from all over Australia. Ms Field will be competing in a number of events, both with her teammates from Penrith Rowing Club and also with rowers from other clubs in Queensland and Canada from 7th August 2013 until 11th August 2013 at the eighth World Masters Games in Torino, Italy.

Rowing is both a social and fitness activity for Ms Field and is a little different from her role here at UWS – research, education, training and consultancies in the emerging speciality of Elder Law.

“I certainly row for fitness, but I love the sport itself – obviously since at the moment, while training for the World Masters Games I get up at 4.20am five mornings a week and catch public transport out to Penrith,” says Ms Field.

“The Games were never a goal of mine, they’re just something really good fun to do. I competed in the last Games which were in Sydney in 2009, and why wouldn't you compete in these ones when they are in Torino!”

“What I am not looking forward to is that sick feeling that I always get rowing down to the start then sitting there tense, waiting for the hooter to go off. Once the race starts I then just concentrate on staying alive until the next hooter tells me I survived another race!”

Ms Field and her teammates’ preparations have been enhanced by UWS Bachelor of Health Science students.

“For the last two years Penrith Rowing Club have provided a session on rowing for the students and it was this year that I realised that we could have our physical assessments undertaken by the students,” says Ms Field.

The assessment comprised of resting and exercise heart rate and blood pressure readings, coupled with measurement of their aerobic fitness on a cycle ergometer.

“The staff and students were fantastic, friendly and professional and we all thoroughly enjoyed the attention. There is nothing like being confronted with the results though, especially seeing as how we all thought that somehow we would look like, and be as fit as Kim Crowe!”

With the Team having passed their physical assessments, training is now in full swing ahead of the games kick-off in four weeks time.