UWS Solar Car supported by Lenovo and powered by SunPower 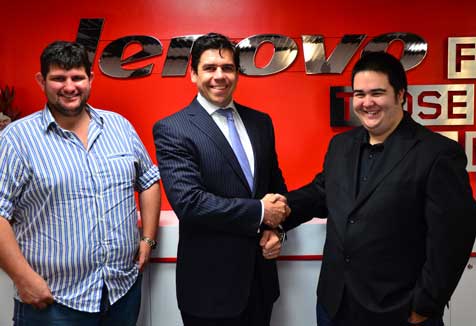 The University of Western Sydney Solar Car Team is excited to announce its latest partnership deals with Lenovo and SunPower.

Lenovo, one of the world's largest suppliers of PC equipment, has agreed to supply the Team with D20 and S20 ThinkStations, and continued support, to assist in the design and execution of their world class solar car 'Solace'. The partnership deal is valued at over $10,000.

Jay Manley, Team Lead of the UWS Solar Car Team, is excited about how the Team's preparation will be improved by the use of this equipment.

"The ThinkStations Lenovo are supplying us with are very powerful workstations, certainly beyond the capability of what we have been using previously.  They will help us to drastically reduce our simulation time and greatly improve our productivity in 3D," says Jay.

"The ThinkStations will be a great asset in the coming months as we finalise the build of our car and prepare for the race in October."

This deal with Lenovo follows the Team's milestone partnership agreement with SunPower which was secured late last year.

SunPower, one of the largest suppliers of high efficiency solar cells and panels, has agreed to supply the UWS Solar Car Team with their required solar cells. The cells were delivered at the end of December and were greeted with relief and enthusiasm by the Team.

"To be honest, it's quite a relief to have this deal under our belt – a solar car is pointless without solar cells so now that we have our cells guaranteed we can begin really moving forward," says Jay.

Although well into their preparation, the Team still have a long way to go before they are ready to race in the World Solar Car Challenge along the Stuart Highway in October.