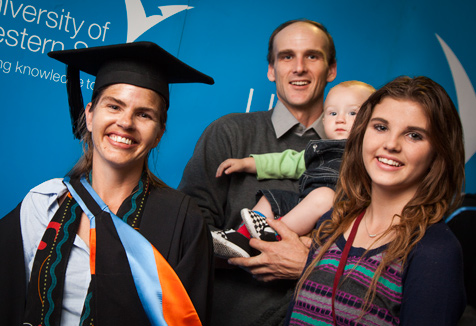 Leonie McIntosh was one of thousands of University of Western Sydney students who marked the end of years of study by donning a cap and gown and walking across the graduation stage this week.

To the Indigenous community in Albury-Wodonga, Leonie is more like one in a million.

With an ambition to become a primary school teacher, Leonie first enrolled in a Bachelor of Education degree at UWS in 2005. By 2009 she had completed the undergraduate degree, and went on realise her dream by working as a casual teacher.

In 2011, Leonie’s academic career reignited when she was given the opportunity to compete an extra year of Honours study. This week Leonie has become a UWS graduate once again, and she is now embarking on a career in research.

“Going into research was not something I had planned, I was just so happy to become a primary school teacher,” says Leonie.

“When I got the opportunity to go onto Honours, I was thrilled and very nervous about doing something completely different to what I have ever done before. I am now working at Charles Sturt University as an Indigenous Academic Fellow and am involved in teaching as well as research.”

For her Honours thesis at UWS, Leonie studied the assets and qualities that Indigenous children bring to the classroom.

“In this research, I was interested in finding out what we as a community value in our children and what this means in classrooms,” says Leonie.

“During my teacher training I noticed that many Indigenous children start school full of confidence and ready to learn, however by the end of their first or second year of school they often fall behind.

“As a teacher and as a parent, this deeply concerned me – so my research aimed to investigate all the good things that our children bring to school and highlight these ‘assets’.”

Leonie’s Honours study identified a diverse range of qualities that the community values in children.

“But above all, the biggest asset of local children was identified as their Indigenous culture – the children are aware of who they are, and where they come from, and this sense of identity was seen as a real asset.”

Studying at the UWS Bankstown campus required Leonie to travel more than 552 kilometres from Albury to Sydney. She says, without the support of the University’s Badanami Centre for Indigenous Education, it would not have been possible to complete the five-year degree.

“As an Indigenous person, your ties with the community are extremely important. Moving away from my community was not an option, and I also needed to keep working and caring for my family,” says Leonie.

“The AREP program recognises the strong connections that Aboriginal people have with their communities and families. Without the option of studying in block mode, it would not be possible for many Indigenous people to acquire a University education,” says Leonie.

As an Indigenous Academic Fellow at Charles Sturt University, Leonie will be continuing her research into Indigenous education issues – in particular, the transition to school for Indigenous children and Indigenous research protocols.