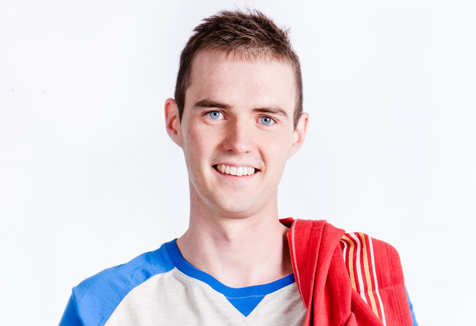 A University of Western Sydney graduate will feature as one of only ten contestants on Channel Nine's latest cooking competition, The Great Australian Bake Off, starting Tuesday 9 July at 8.00pm.

Since submitting his application for the show, Brendan Garlick has graduated from the University's Bachelor of Business and Commerce (Advanced Business Leadership).

"I sent my application back in September, after finding out about the program on Twitter," says Brendan.

"It all moved quite quickly after that – I was asked to attend an audition in Sydney, where I needed to prove my skills in baking, and then I attended another Melbourne audition that focused on how I performed in front of the camera."

Brendan says the filming of the show in Victoria involved long, intense days, complete with 6am starts, 6pm finishes, and a succession of competitive, high-pressure challenges.

At 21 years of age, Brendan is the youngest person competing for the title of 'Australia's Best Home Baker' – although he still has a wealth of experience to offer, having been refining his craft in the kitchen since the age of seven. A resident of Springwood in the Blue Mountains, Brendan studied his three-year degree at the UWS Parramatta campus and graduated with a major in Hospitality Management.

Described by Channel Nine as "bright, cheeky, geeky, determined and competitive," and has been fondly dubbed 'The Big Bang Baker.'

"I guess they are hinting that I look a bit like Sheldon from The Big Bang Theory – which I don't mind, because I really like Sheldon as a character," he says.

"The whole process really was a lot of fun, so I hope that sense of enjoyment comes across on the television screen."

The Great Australian Bake Off, hosted by Shane Jacobson and Anna Gare, is a local version of a popular television format that began on BBC TWO in the UK in 2012. The format has also since been adapted in Denmark, Sweden, Belgium, Poland, Ireland, Norway and France and an American series is also in production.

The UWS News Centre will follow Brendan's progress in the competition as judges Kerry Vincent and Dan Lepard name a "Star Baker" and eliminate the weakest performer each week.