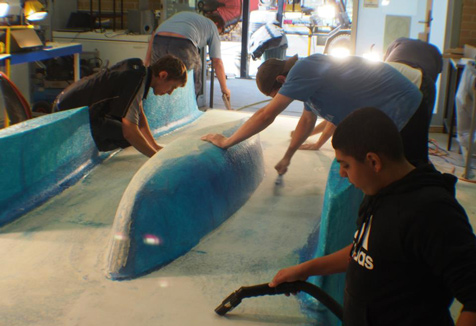 The University of Western Sydney Solar Car Team have had a busy couple of weeks as they hurtle towards the World Solar Challenge.

"Time is going really fast but we're on schedule and are trying our hardest to keep on top of things," says Jay Manley, UWS Solar Car Team Lead. "We're entering the final stages of constructing the body of our car 'Solace' and will soon hand the car over to our mechanical and electrical team members."

Over the last few weeks the team have constructed a mould of their car using foam blocks cut to size using CNC technology. They are currently applying the last few layers of resin, prepreg carbon fibre and nomex. Once this has been completed, the entire mould will be placed inside of a 20 foot long shipping container that the team has converted into an oven, to be baked and set.

"This has been a long process, mostly due to the amount of sanding we've had to do, but we're really happy with the progress that has been made," says Albert Mahoney, Lead Mechanical Engineer. "It's great to see the design of 'Solace' coming to life after so many hours of calculations and simulations."

While working away on the mould in the Solar Car Lab last week, the Team got to learn a bit more about their competition and what they can expect out on the Stuart Highway with the World Solar Challenge releasing the official list of teams.

"It's one of the largest fields yet – 47 teams from 26 countries," says Jay. "Although a larger field than we were expecting, we're still confident in our design of 'Solace' and are anticipating being well placed at the finish line."

A major factor in finishing the race well placed will be the skills and expertise of the Road Crew who will accompany 'Solace' on its journey from Darwin to Adelaide. The Road Crew, due to be finalised this week, will consist of four drivers, a four-man electrical team, a four-man mechanical team, a communications officer, a media liaison, and a race documenter, as well as safety and medical officers, a logistics team, support vehicle drivers and general assistants.

"We're hoping to put together a group of people who each have varied skills and expertise so that when we are together as a team we have a full skill set and can lean on each other for help, support and advice along the way," says Jay. "Due to budget constraints some people will need to take on more than one responsibility but I have no doubt that we will have all of our bases covered."

The Team has also recently been cooperating with the School of Computing, Engineering and Mathematics and the Institute for Infrastructure Engineering to relocate some of their lab space and equipment out of building XA to assist with upgrades to the space. Although a small inconvenience now, the upgrades to the lab will help with making a usable, safe and high quality space for future UWS Solar Car Teams to use.