What Matters? finalists highlight the power of the individual and call for an end to global injustice 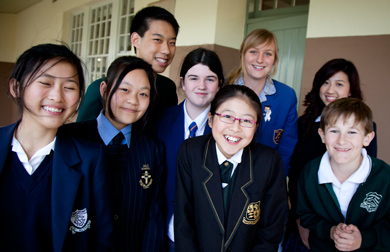 The finalists for the What Matters? essay competition, hosted by the Whitlam Institute and proudly sponsored by Officeworks, once again show that young people in Australia have a strong social conscience and are highly attuned to the world around them.

In 2012, more than 3,500 entries were received for the What Matters? competition from students in years 5-12, representing more than 200 NSW and ACT schools.

Director of the Whitlam Institute, Mr Eric Sidoti, says the eight finalists were chosen for the exemplary quality of their writing as well as their eloquent portrayal of global issues that are likely to strike a chord with young people all over the country.

“If our finalists had their way, the world would be a very different place,” says Mr Sidoti.

“For one thing, child labour would be completely abolished; whaling would also be no more that a sad chapter in the world’s modern history; Australian students would be introduced to traditional Indigenous languages at school; and there would be true equality between genders.”

Rebecca Chung from Abbotsleigh, the year 5/6 runner-up in the What Matters? competition, addressed in her essay The Inconvenient Truth the abhorrent conditions that are faced by children working in sweat shops.

Rebecca’s essay is both direct and unapologetic. She describes the exploitation of children as being an “insult to humanity” and goes on to challenge the reader to take a stand. She writes:

“Children have the right to live in a safe and happy environment... We cannot let this shameful and shocking act continue any longer.”

Sheree Kuan, the year 7/8 winner from MLC School, makes an equally impassioned plea for the plight of the Minke whale in her essay, The Voice of the Whale.

Written from the perspective of a whale calf, whose mother is harpooned and hauled on to the deck of a ship, Sheree lyrically writes:

“The engine triggered again. I followed the ship for hours, calling out to her until my voice was hoarse. But there was no lilting answering lullaby. There was only blood.”

With the reader effectively drawn-in to the whale’s story, Sheree then calls for all human beings to see sense – to “show some humanity” and “simple respect” for these innocent creatures.

In his essay, Language is the inventory of human experience, Alexander Husarek, the year 5/6 winner from Lapstone Public School, conveyed his dismay at the loss of more than 120 traditional Indigenous languages in Australia.

For Alexander, language is important way of communicating “our thoughts, our desires and our hopes,” and connecting with family, friends and the community. His suggestion, to ensure that Aboriginal culture is saved from extinction, is to integrate local Indigenous languages into school syllabuses:

“Schools could promote their local traditional language and renew the oral traditions that are so important to the Aboriginal human experience. School language programs could renew a critically endangered language.”

Tamara Lennon, the year 11/12 runner-up from Trinity Catholic School, is a finalist for her essay Making a Difference – about the importance of gender equality.

In her essay, Tamara reflects on the story of Anne Frank – the 13-year-old girl who documented her experiences of hiding during the Nazi occupation of the Netherlands during World War II in a diary.

For Tamara, Anne Frank’s story stands as a reminder of how, using only words, one person can make a real difference to the world.

“As global citizens it is our duty to advocate for change... Making a difference means sharing your thoughts, hopes and passions with the world. In sharing yourself, you give something of greater worth to society.”

It was with a similar impetus that Amy Ma, the year 11/12 winner from Sefton High School, in her entry The Cost of Wealth, wrote about the unique perspectives of young people:

“Adolescents are able to provide; a different standpoint, an original view of the world through fresh eyes. We are able to home in one the small scale issues which makes a huge tear directly in our young lives.”

Mr Sidoti says the themes of Tamara’s and Amy’s essays encapsulate the spirit of the What Matters? competition – which was conceived as an opportunity to give young people a platform for expression, where their views can be heard and validated.

“Each year, the Whitlam Institute is fortunate to receive essays from some very bright and compassionate young people who, through their writing, are able to demonstrate a clear and mature understanding of some very complex subjects,” says Mr Sidoti.

“What makes What Matters? such a jewel of a competition is its capacity to draw from young people their own unique perspectives, which are often succinct, clear-cut, and untainted by the bias and prejudice that often comes with age.”

A popular theme amongst some of the What Matters? finalists’ essays in 2012 is the importance of individuality and freedom of expression for young people.

Natasha Langdon, the year 7/8 runner-up from Hurlstone Agricultural High School, in her entry, Truth to Myself, wrote about the pressure on young people to conform to society’s expectations:

“Popular society will never let you win. No matter what you do, someone somewhere will put it under the magnifying glass, chipping away at it with horrible remarks, and at the same time chipping away at your self-esteem.”

For Natasha, ‘what matters’ is the courage for young people to turn a blind eye to peer pressure; to stop focusing on fitting-in; and to embrace individuality.

Laura Bee, the year 9/10 runner-up from North Sydney Girls High School, broached some similar topics in her essay Solitude – which focused on the challenges the ‘introverted individuals’ often face in a world that “continually favours, encourages and rewards extroversion.”

For Laura, it is important for the quieter people in society to be accepted, and for their contributions to be valued:

“It was in solitude that writers like Dr Seuss and scientists like Charles Darwin came up with their ideas and discoveries. It was with a peaceful disposition that Ghandi led India to national independence. It was a soft-spoken refusal that Rosa Parks sparked the Civil Rights Movement.”

This focus on the value of individual was also replicated by Richard Tong, the year 9/10 winner from James Ruse Agricultural High School, in his essay Uniformly Individual:

“The light turns green, we walk. The light turns red, we stop. Like a pack of sheep, we wander through life questioning in our actions, unthinking in our words. Our world is, and has always been one of conformity.”

For Richard, the key to human evolution and progression is individuality. He says: “If we are to evolve, if we are to survive, we must accept our difference, and learn to question everything.”

Mr Sidoti says, if the themes of these essays are anything to go by, young people today appear place a high value on their own independence, and forging their own paths in the world.

“For a young person, this takes immense courage. Hopefully, by having their essays featured as finalists in the What Matters? competition, they will inspire others to do the same. That’s why this competition is so important.”

Each of the What Matters? finalists will attend a special awards ceremony at the University of Western Sydney’s Parramatta campus on Friday 17th August 2012, where the overall competition winner will be announced.

The event will be live-streamed to the UWS News Centre. All media enquiries and requests to attend the event should be directed to the UWS Media Unit.