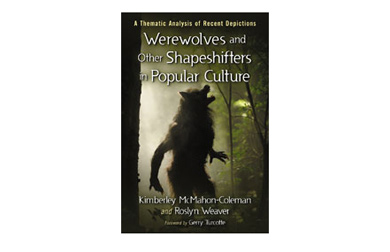 The growing popularity of werewolves and other shapeshifters in popular culture plays a part in sparking debate about important issues such as social alienation and difference, according to a University of Western Sydney expert.

Dr Roslyn Weaver is the co-author of Werewolves and Other Shapeshifters in Popular Culture, which explores how fantasy monsters are often used as metaphors for real world issues including adolescence, disability and addiction.

The book will be launched with co-author Dr Kimberley McMahon-Coleman, from the University of Wollongong, at the Shoal-Bites cafe on Friday, August 3 at 6pm.

Dr Weaver, from the UWS School of Nursing and Midwifery, says fantasy creatures can allow society to better understand and sympathise with marginalised groups.

"Like vampires, werewolves have gone from being evil monsters to misunderstood outsiders in society, and their experiences encourage readers to understand what it's like to be isolated and feared," she says.

"The classic example is Remus Lupin from the Harry Potter series, a werewolf who was excluded from society because of his condition.

"Lupin can be seen as a metaphor for real life experiences such as having a disability, or AIDS, and authors sometimes use werewolves in this way to provoke readers to think about their own prejudices."

Dr Weaver says other popular werewolves, such as Jacob from the Twilight franchise, are attractive to readers because they are heroes with a conflicted identity.

"In some ways Jacob is dealing with what most teenagers have to face in a much more general way, dealing with changing bodies, feeling like you don't belong, and trying to find your own identity when you're caught between child and adult identities," she says.

"Monsters have always been a way for authors to explore social issues, and werewolves in particular offer a lot of scope for thinking about identity and moving beyond limits and boundaries."