The University of Western Sydney’s Penrith campus Observatory will be the best place in Sydney to witness one of the rarest astronomical phenomena of our lifetime – the Transit of Venus – on June 6, 2012.

The Transit of Venus occurs when Earth’s closest neighbour, the planet Venus, passes directly between Earth and the Sun. From Australia, Venus will look like a small, round silhouette, slowly moving across the surface of the Sun.

Director of the UWS Observatory, Associate Professor Miroslav Filipovic, says UWS has the biggest and best telescope within a 200-300km radius.

“The University’s 24inch (62cm) computerised telescope is equipped with special solar and prominence filters, which will allow for a safe and exemplary viewing experience,” says Associate Professor Miroslav Filipovic.

“As part of the Transit experience at UWS, guests will have the opportunity to view Venus’ travels through a range of telescopes and hear a short, educational talk.

“The entire event will also be televised in a new 3D movie theatre within the Observatory, and will be live-streamed on the University’s website.” 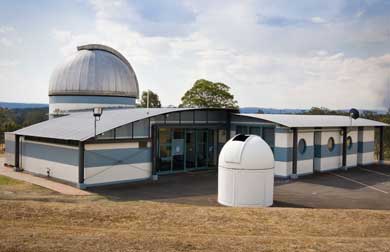 The Transit of Venus occurs in pairs, in cycles of more than 100 years. Captain James Cook sailed to Tahiti to observe a pair of Transits in 1761 and 1769, and our direct ancestors may have been fortunate enough to see the Transits of 1874 and 1882.

The first Transit of our lifetime occurred in 2004. After this year’s Transit, Venus will not pass between Earth and the Sun again until December 2117 and 2125.

Members of the community are invited to book-in for a special one-hour viewing of this important celestial event, from 8am on Wednesday 6th June 2012.

Although optimal viewing of the Transit is dependent on a clear and cloud-free day, this special event will run regardless of the weather with the assistance of the Western Sydney Amateur Astronomy Group (WSAAG).

WHAT: The UWS Transit of Venus Experience
WHEN:  The Transit will take place from 8.15am to 2.45pm, Wednesday, 6th June 2012
WHERE: Building AO, UWS Penrith campus, Great Western Highway, Werrington North
COST: $10 per person

Bookings are essential. To schedule your viewing of the Transit of Venus, please contact the UWS Observatory on: (02) 4736 0135 (Mondays, Wednesdays and Thursdays) or email r.mccourt@uws.edu.au