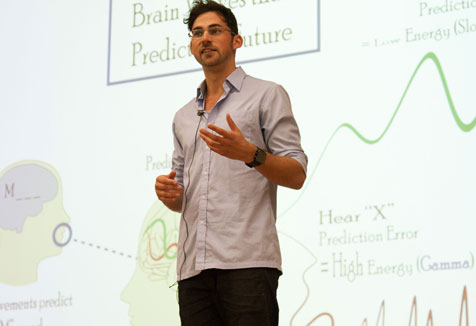 University of Western Sydney PHD student Tim Paris has won the prestigious Trans-Tasman Three Minute Thesis competition with a presentation detailing his unique research into the human brain's ability to predict the future.

The Three Minute Thesis Finals, held at The University of Queensland, saw representatives from more than 30 universities across Australia, New Zealand, Hong Kong and the South Pacific condense years of research into short, accessible presentations for the public.

In front of a judging panel including Robyn Williams from the ABC Science Show, UWS MARCS Institute student Tim Paris was awarded the top honour, gifting him a five thousand dollar research grant and ensuring next year's finals will be hosted at the University of Western Sydney.

Mr Paris's thesis, Brain Waves that Predict the Future, explores how gamma waves in the brain may be associated with helping us develop a mental model to predict events before they happen.

"Neuroscientists are discovering that we are living slightly in the future- it's all to do with predictions, and we're doing it all the time," he says.

"For example, when someone moves their lips together to speak, we make a prediction about what sound he or she will say. If we hear the sound we expect, then we see slow waves in the brain."

"However if the sound is unexpected, our brain generates high frequency waves (called gamma waves). These gamma waves are the brain's signal to itself that something has gone wrong. I think that this gamma activity is also involved in updating our model of the world so the same prediction errors aren't made again."

Mr Paris says he will test this theory by mapping what happens to people's brain waves as they experience unexpected events more and more often.

"What I should see is these predictions changing over time so the high frequency gamma waves will eventually disappear," says Mr Paris.

"If the results are as expected, we can investigate other populations where people don't update their model in the same way – for example, people with schizophrenia don't show surprise even when they have hallucinations."

"It may be that they're missing one key ingredient of perception, gamma waves, and I believe this research can lead to better identification and treatment of people with these conditions."

"At MARCS our PHD students are involved in a wide range of new and exciting research projects, and have an enviable track record of securing work at a range of well-known research institutions around the world."

"On behalf of all of us at MARCS, I'd like to congratulate Mr Paris on this award; we predict, even without perusing his brain waves, that Tim will go on to great heights and we wish him all the best."