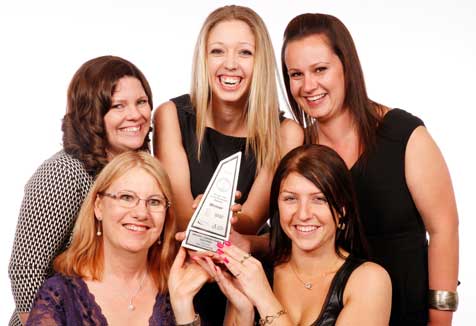 UWS Early Learning Penrith Djalaringi has been recognised as the best child care in Penrith by the Penrith Local Business Awards.

Based on the Kingswood Campus of the University of Western Sydney the centre currently services 75 families and Tessa McGavock, Director of UWS Early Learning Penrith Djalaringi, says the centre and its families are very pleased to have been announced the winners.

“We are over the moon to have won this award,” says Mrs McGavock. “It has given our morale a great boost and it is always nice for staff to receive outside recognition and to know that they really are doing a great job.”

“This award highlights our transition to school program, sustainability initiatives and strong Indigenous culture program and there is no doubt that it will set a benchmark and help parents make an informed decision about their children’s education.”

Nominees for the Local Business Awards are judged on presentation, quality of product, value for money and customer service. Local residents and customers are also invited to vote for their favourite businesses.

“The staff at UWS Early Learning Penrith, are a very dedicated and committed team and it’s great to see them recognised for their efforts,” says Ms Williams. “They do really amazing work with sustainability and the Indigenous community which encourages the children to become life-long learners.”

The awards were announced on Wednesday 5th September at St Marys Band Club and UWS Early Learning Penrith won the ‘Childcare Services’ category after being nominated by a parent.