The University of Western Sydney and a range of partners have joined a global network focused on education for sustainable development.

On Thursday 27th September 2012, UWS will host the Official Launch of the Regional Centre of Expertise on Education for Sustainable Development in Greater Western Sydney (RCE-GWS).

RCE-GWS is acknowledged by the United Nations University as one of the world’s 101 Regional Centres of Expertise (RCEs). RCE-GWS is the third Regional Centre to be established in Australia, and the first for the nation’s east coast.

The Regional Centres – which operate out of Europe, the Americas, Africa, the Middle East, and regions of the Asia-Pacific – have all been established with a common goal: Mobilising local communities to achieve the goals of the UN Decade of Education for Sustainable Development. It is based on the adage ‘Think Global and Act Local.’

The Hon Greg Combet AM MP, Minister for Climate Change and Energy Efficiency, and Minister for Industry and Innovation, will officially launch the RCE-GWS at the special UWS Hawkesbury campus ceremony which commences at 10:30am. 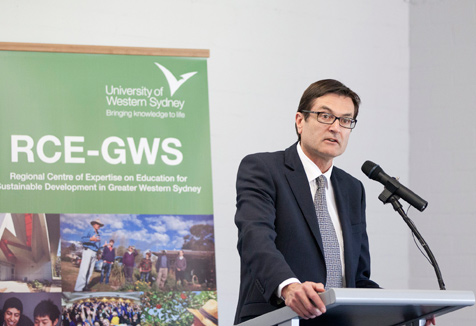 The Hon Greg Combet AM MP, speaking at the Official Opeing of the RCE-GWS

“UWS has long been committed to environmental, cultural and social responsibility in its core business – including its curriculum, research, engagement activities and daily operations,” says Professor Scott.

“Establishing the RCE-GWS is this next natural step for UWS to maintain its position as an Australian leader in the field of sustainability, and the University is thankful for the support it has received from all the educational networks in GWS as well as a wide range of community groups and organisations which have made this new venture possible.”

The ongoing research and learning programs at RCE-GWS are concentrating on four key sustainability challenges that have been identified in Greater Western Sydney:

“The RCE-GWS is overseeing a range of  collaborative initiatives and projects are unfolding  including the establishment of the UWS Hawkesbury Riverfarm Education Centre,” says Professor Scott. 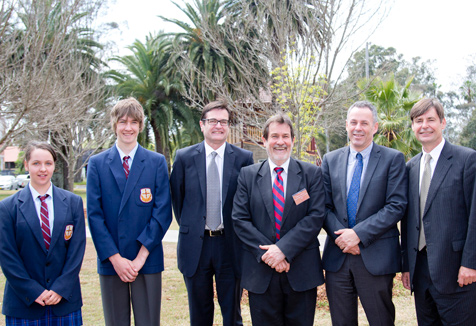 At the Global meeting of the 100 UNU Regional Centres of Expertise in Education for Sustainability in Tongyeong this week, RCE-GWS received two UN University Recognition awards – one for our contribution to creating sustainability leadership at higher education institutions, and the other for establishing the UWS Riverfarm as a living laboratory for learning and action-research on social, cultural, economic and environmental sustainability challenges.

At the same meeting of the RCE convenors, the UN University launched the book, Sustainable consumption, production and livelihoods, in which the UWS Riverfarm is featured.

WHAT: Official Launch of the Regional Centre of Expertise on Education for Sustainable Development in Greater Western Sydney (RCE-GWS)

Media are invited to attend the Official Launch event. For more information or to register attendance, contact the UWS Media Unit. The event will also be live-streamed to the UWS News Centre.