As Australians prepare for one of the hottest summers on record, people looking for inspiration to survive the blistering heat should consider the remarkable durability of our native trees, with new research unearthing an unknown resilience to extreme heat waves.

The study, lead by Dr Sebastian Pfautsch at the Hawkesbury Institute for the Environment at University of Western Sydney and published in the international journal Oecologia, recorded the effects of the 2009 heatwave from within Mountain Ash forest at Britannia Creek, near Warburton. Results show that the forest giants survived due to their incredible ability to store, use and refill water in their stems.
"There's been much concern Australia's tall trees could succumb to higher temperatures and less rainfall, but our study shows they're far more resilient than expected," says Dr Sebastian Pfautsch .
The 2009 heatwave in Victoria saw temperatures close to 49°C and within the usually cool and moist Mountain Ash forests, temperatures climaxed above 42°C.
"Current theory would suggest that many Mountain Ash trees that were not affected by the fires should have died of severe water stress on Black Saturday, but they did not," says Dr Pfautsch.
"The remarkable ability of this species to grow quickly and reach tremendous heights, yet survive extreme droughts and heatwaves, is very heartening as we enter a period of history which is predicted to see increasing numbers of extreme weather events."
The ability to survive owes much to the capacity of the trees to use stored water that will be mobilized when water in the soil becomes limiting. This feature is emphasized by the researcher's recording of substantial water uptake by the trees at night.
"Wood of these remarkable trees can act like a sponge, being squeezed dry during the day and recharged during the night" explains Dr Pfautsch.

"Until recently, it had been widely assumed that water uptake at night was a minor process, but the Mountain Ash trees 'recharged' their internal storage at night." 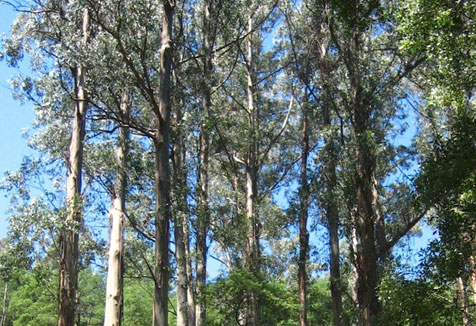 Dr Pfautsch's co-investigator, Professor Mark Adams from the University of Sydney, says water use by Mountain Ash is critical to determining water yield for the City of Melbourne.
"Understanding how and how much the trees use water under extreme conditions, and understanding how extreme conditions affect the trees, is therefore vital to future catchment management," Professor Adams says.
But Dr Pfautsch says more research is needed to ensure we fully understand the complex eco-systems of our forests.
"Many questions remain before we can accurately predict their future in a warming world," Dr Pfautsch says.