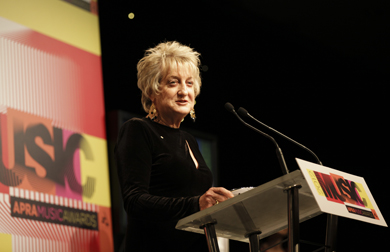 The University of Western Sydney congratulates Mary Lopez – the recipient of the Ted Albert Award for Outstanding Services to Australian Music at the 2012 APRA Music Awards.

The Australasian Performing Right Association (APRA) Awards are hosted each year to recognise and celebrate the success of music creators across all genres.

The Ted Albert Award is bestowed upon individuals who have made extensive contributions to shaping and developing the Australian music landscape.

Mary Lopez, the Founding Director of Schools Spectacular, was presented the award on Monday 28th May, at a special ceremony in Sydney.

As a Ted Albert Award recipient, she joins an esteemed group of Australian music legends, including Slim Dusty, Angus and Malcolm Young, and Paul Kelly. APRA's Board of Writer and Publisher Directors described Mary Lopez as “a highly respected talent consultant committed to finding ways to develop and showcase talented Australians of all ages.”

Throughout her career, Mary Lopez has staged almost 60 significant productions, including the Schools Spectacular, ‘An Australian Christmas’ at Darling Harbour, the NSW Premier’s Concert, the World Indigenous People’s Conference Opening and Closing Ceremonies.

As Director of the Schools Spectacular for 25 years, she has provided thousands of young people with an inspirational and exciting experience that will stay with them for the rest of their lives.

She is also a co-founder of The Talent Development Project (TDP) that works with the NSW Department of Education and Training in selecting a small group of exceptionally talented students from across the State. Together, they develop and nurture these students' skills with the help of industry professionals.

Her contributions to the performing arts have also been recognised by her appointment as a member of the Order of Australia, one of this country’s highest honours, in 1999, and by receiving the Variety Humanitarian of the Year Award in 2007.

In 2010, the University of Western Sydney recognised Mary Lopez’s outstanding contributions to public school education and the performing arts, by presenting her with an Honorary Doctorate of Letters, honoris causa. The University is also a supporter of the Schools Spectacular.

The University extends its congratulations to Mary for this significant and well-deserved honour.