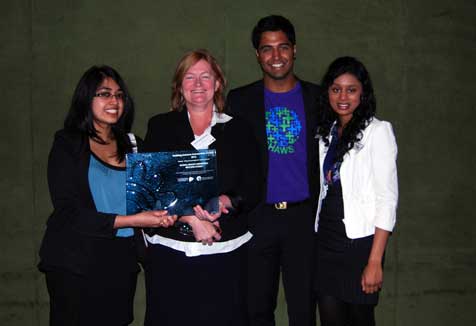 The winners were announced on Thursday 6th September at Parliament house, Sydney by The Hon Barry O'Farrell MP, Premier of New South Wales.

Establishment in 2009, the Global Health Awareness Western Sydney (GHAWS) arm of the UWS Medical Society has been responsible for numerous community initiatives including mentoring students from Robert Townson High School in Raby, assisting the Autism Advisory and Support Service in Liverpool, and collaborating with the Birthing Kit Foundation of Australia.

"The UWS School of Medicine was established in 2007 with a focus on the health and social needs of those in the Greater Western Sydney community. As medical students we feel we have a responsibility to assist, support and make a difference to the community that has welcomed our establishment," says Brian Fernandes, Community President of GHAWS.

Individuals and groups receive these awards based on their work with and support for Indigenous Australians and or people from culturally and linguistically diverse backgrounds. Awards are based on current activities that have a long-term focus and a strong history of positive community contributions.

The mentoring program at Robert Townson High School has seen the Medical Society engage with students from all grades and mentor them on issues such as discrimination, racism, substance abuse and self-image.

"Many of these students come from challenging backgrounds. Our sessions give them a chance to speak to a responsible person close to their age group, in a safe and positive environment," says Brian.

The medical students have extended their reach into the Greater Western Sydney region through their relationship with the Autism Advisory and Support Service. This relationship has seen the students attend weekend outings with young people with Autism and their families.

"This provides positive social interaction for our peers with Autism Spectrum Disorder, a form of clinical experience for us students and a form of respite for families and caregivers," says Brian.

The UWS students recently heard how the 1200 birthing kits they assembled, as part of their annual Birthing Kit Assembly Day for the Birthing kit Foundation of Australia, have arrived in Nigeria and are currently being distributed to local communities.

Professor Annemarie Hennessy, Dean of the School of Medicine, feels the award is well deserved by GHAWS.

"UWS medical students understand the disparities and disadvantages faced by the community and are passionate about making positive contributions to the area," says Professor Hennessy.

"The students have managed to translate their understanding of social issues into direct action aimed towards the betterment of the community and this award recognises their commitment to building and maintaining inclusive communities."

Building Inclusive Communities Awards are a joint initiative of the Ethnic Communities' Council of New South Wales and Macquarie University. GHAWS were the winners of the youth category for projects and contributions developed and or managed by people aged 25 and under.