Lots of buzz at the Brain Bee Challenge 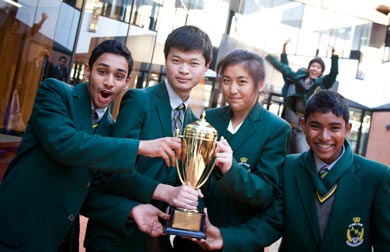 124 of the brightest Year 10 students in NSW converged on the University of Western Sydney's School of Medicine to compete in the State Finals of the Australian Brain Bee Challenge on Thursday 26 July.

Individual and team competitors battled out each round, to the sounds of their school cheer squads, with the ultimate prize of Brain Bee NSW State champion ultimately being awarded to Vivienne Qingyu Zhang, from Ascham School.

As the winner of the State Final, Vivienne will compete as the NSW representative at the National Brain Bee Challenge in Melbourne in February, 2013, during the annual Australian Neuroscience Society conference.

The top three students will receive conditional academic excellence scholarship offers, providing $5000 per year for up to four years study at UWS.

* A Primostar microscope for the winning team's school, provided by Zeiss;
* Books and iPods for the top three students and the members of the winning team from the NSW event major sponsor, UWS;
* iTunes vouchers from national sponsor ADInstruments; and
* Each student attending received a Brain Bee t-shirt and a show bag, also supplied by UWS. 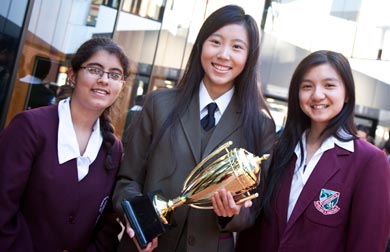 33 high schools from as far afield as Kempsey, Wagga Wagga and Orange participated in the NSW Finals.

The students competed in live question and answer rounds where they were tested on topics relating to the functions of the human brain such as intelligence, memory, emotions, sensations, movement, stress, sleep and addiction.

Vivienne says she prepared by studying the whole week prior to the competition.

“I like most subjects at school but I would really like to be a neurosurgeon one day,” says Vivienne.

“My philosophy teacher put me forward for the competition and I am really glad that I got to compete in the Brain Bee Challenge. I would encourage students to enter the competition next year. I was fortunate enough to meet a lot of great people and I really got a lot out of the day.”

Professor Vaughan Macefield, from the UWS School of Medicine and NSW Coordinator of the Australian Brain Bee Challenge, says the competition was a great success.

"For the last five years, UWS has proudly hosted the Australian Brain Bee Challenge. These very bright students get to test their knowledge of the brain and participate in engaged learning that will hopefully inspire a new generation of neuroscientists," says Professor Macefield.

Schools in the NSW Finals of the 2012 Australian Bee Challenge were: