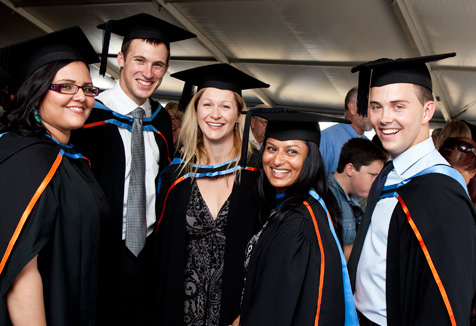 The University of Western Sydney's Parramatta campus will be awash with colour as hundreds of eager graduands don cap, gown and colourful hood to make the transition from dedicated student to proud UWS alumni.

On Wednesday 19th and Thursday 20th December, 1618 graduands will receive degrees in a wide range of disciplines including education, law, business, medicine, nursing and science and health.

Since being trialled for the first time last year, the special Summer Graduation ceremonies have formed an important part of the University’s calendar allowing students needing their conferral to start in the workforce straight away instead of waiting to graduate the following year.

During the Summer Graduation ceremonies, two University Medals will be presented to students who achieved consistently high results throughout their studies.

An Honorary Doctorate will be presented to The Honourable John Fahey AC in recognition of individual excellence for his demonstrated leadership, commitment, integrity and dynamic energy at the highest level of Government, national sport, community and business.

Members of the community will also be recognised, with UWS Community Awards being presented to six recipients for contributions to the Greater Western Sydney region.

A highlight of each graduation ceremony is the Occasional Address. In December 2012, UWS graduands and their guests will have the opportunity to hear from a range of distinguished guest speakers: 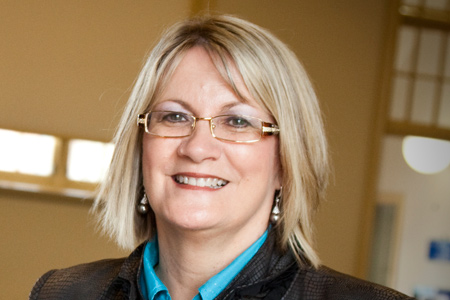 During her time in Federal Parliament, Louise has held the positions of Shadow Parliamentary Secretary for Immigration and Citizenship, and Shadow Minister for Veterans' Affairs.  She is currently involved with the Joint Standing Committee for Foreign Affairs, Defence and Trade.

Louise holds a Bachelor of Social Work from the University of NSW. Before becoming a parliamentary representative, she worked as a senior social worker at the (then) Department of Social Security, as Manager of Family Support Services at Wesley Mission, and as a teacher at TAFE. She has worked with families, individuals and communities to help them take responsibility and find practical solutions to the situations they faced.

Louise is passionate about developing and delivering programs that provide opportunities for young people, and being a strong voice for those in her community. 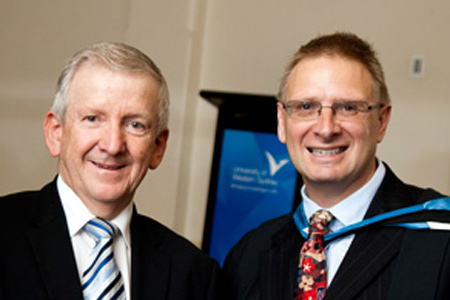 Roger Dive has been a Judge of the District Court of NSW, and Senior Judge of the Drug Court, since mid-2004.  Prior to this, he was a Local Court Magistrate for over 15 years, and during this time held the roles of Senior Civil Magistrate and Senior Children’s Magistrate.

While in the Children's Court, Judge Dive was responsible for developing and implementing the NSW Youth Drug and Alcohol Court in 2000, and his passion and commitment to the program has been a major contributor to its success.

He moved to the NSW Adult Drug Court in 2004. Judge Dive's conviction that Drug Courts are effective at reducing the impact and negative effects of drugs and drug-related crime, led him to preside over the expansion of the NSW Drug Court to the Hunter Valley.

Working tirelessly throughout his career to promote a humane response to offenders with alcohol and drug problems, he is also active in the international arena and is a board member of the International Association of Drug Treatment Courts.

Justin Scarr graduated from the University of Western Sydney in 1991 with a Diploma of Teaching, followed in 1993 with a Bachelor of Education. After graduation, he spent three years teaching kindergarten and 2nd grade at Auburn West Primary School, before heading off solo for twelve months backpacking.

After returning from his travels, Justin commenced work with the Royal Life Saving Society – Australia, and progressed to the role of Chief Operating Officer to lead a cross functional management team covering education and training, research and health promotion, industry service and risk management, sport development, and marketing and communication.

Justin also holds the role of Drowning Prevention Commissioner for the International Life Saving Federation. His work focuses on reducing drowning in Australia and across Asia, and takes him to a diverse range of places including Bangladesh, Vietnam and Remote Indigenous Australia.

Justin is a past chair and current director at Service Skills Australia, an industry skills council responsible for promoting skills, training and workforce development in the sport and recreation, tourism and hospitality, and retail industries. Former New South Wales Premier and current President of the World Anti-Doping Agency, John Fahey, will receive an honorary doctorate from the University of Western Sydney in recognition of his contribution to Australian politics and sport.

Mr Fahey will receive a Doctor of Letters, honoris causa, at a graduation ceremony being held at the UWS Parramatta campus at 5pm, Wednesday 19 December.

The University awards this prestigious honour to those who UWS feels have made a lasting and powerful difference to the wider community.

In a public life of almost 30 years, John Fahey has exhibited exemplary leadership, commitment, and integrity in government, sport, community service and business.

A former Liberal member for Camden and minister in the Greiner Government, the Honourable John Fahey AC was appointed Premier of New South Wales in 1992 and served as Premier until 1995.

Mr Fahey was instrumental in securing the 2000 Sydney Olympic Games, chairing the committee responsible for the preparation, submission and presentation of the ultimately winning bid.

The video footage of Mr Fahey enthusiastically jumping up and down and hugging his colleagues as Sydney was named the winner became emblematic of the widespread joy in the city following the announcement.

Following his successful career in state politics, Mr Fahey was elected to Federal Parliament as the Liberal member for Macarthur in 1996 and was immediately elevated to cabinet as the Minster for Finance and Administration, a position he held until 2001.

In 2002 John Fahey was made a Companion of the Order of Australia for service to the Australian and New South Wales Parliaments, particularly through landmark reform of industrial relations, facilitation of high technology and industry growth, and for raising the international profile of Australia as Chairman of the Bid for the Sydney 2000 Olympic Games.

In 2011 he was appointed chair of the Australian Government Reconstruction Inspectorate, which oversees spending in major reconstruction contracts associated with natural disasters.

Mr Fahey chairs the Australian Rugby League Development Board and the Bradman Foundation, and since 2007 he has been the chair of the World Anti-Doping Agency. 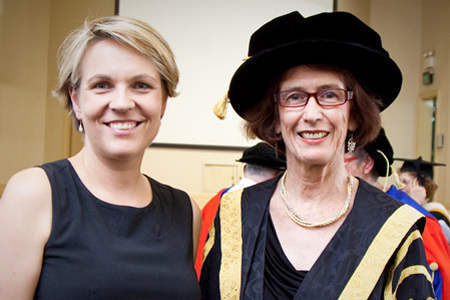 Tanya was elected to the Australian Parliament as the Federal Member for Sydney at the 1998 federal election.

In her first speech to the House of Representatives, Tanya spoke of her strong interest in social justice and her conviction that ordinary people working together can achieve positive change.

Tanya became a Shadow Minister after the 2004 federal election, and for the next three years was responsible for a range of portfolios.

Following the election of the Rudd Government in 2007, she was appointed Minister for Housing and Minister for the Status of Women.

She was also responsible for a Homelessness White Paper that set out a comprehensive national strategy to tackle homelessness in Australia.

As Minister for the Status of Women, Tanya was responsible for  development of the national plan to reduce violence against women and their children. 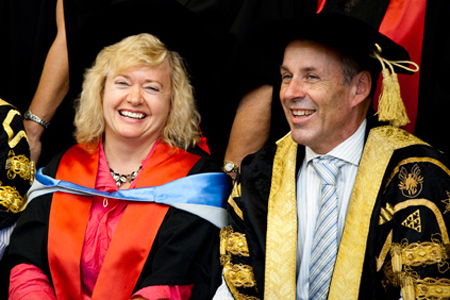 Hannah is the Associate Professor of Midwifery in the School of Nursing and Midwifery at UWS, and has been a practising midwife for 24 years.

She has significantly contributed to the development of maternity services both within Australia and internationally, and is one of the first midwives in Australia to gain eligibility and access to a Medicare provider number following government reforms in 2010.

In November this year she was featured in the Sydney Morning Herald’s list of 100 ‘people who change our city for the better’. Hannah was described by a member of the selection panel as probably the leading force promoting natural birth and midwife-led care in Australia. Susan has worked across the spectrum of nursing continuously for 40 years and in addition to her recent role, has held a variety of professional roles including Director of Nursing and Midwifery with Westmead Hospital, and positions in operational and clinical management, disaster management and research.

Susan has always been committed to improving the delivery of safe and effective care for patients and clients, and has been responsible for maintaining quality professional practice. This includes support and facilitation of best practice models of care that are contemporary and meet the changing health care requirements of the community.

Susan holds graduate qualifications in nursing and a postgraduate degree in clinical practice and management.