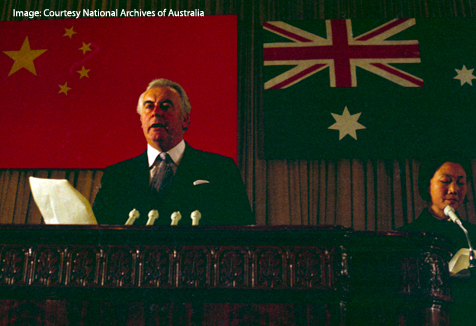 Gough Whitlam in China, during a trip in 1973, after he was elected Prime Minister of Australia

In a paper commissioned by the Whitlam Institute (opens in a new window), former diplomat and Ambassador Dr Stephen FitzGerald AO traces the political, social and cultural developments that led to Whitlam’s bold decision to visit, and later extend diplomatic recognition to the People’s Republic of China. The paper draws on his own experience as part of Gough Whitlam’s historic 1971 delegation to China, and paints a vivid picture of those great moments.

In this compelling essay, entitled The Coup that Laid the Fear of China (opens in a new window), FitzGerald describes the evolution of Australia’s attitude toward China from one of misinformed fear and suspicion to one of respect and engagement – a transformation partly brought about by the bold moves taken by Whitlam.

FitzGerald’s fascinating eyewitness account transports the reader to the very room in which one of the most monumental shifts in Australian foreign policy took place.

“‘FitzGerald’s evocative telling of the story in this ‘part memoir’ captures the passions and tensions, the enthusiasms and the political daring of the adventure that it was,” says Whitlam Institute Director, Eric Sidoti.

“There is nothing in Australian history to compare with that China visit… It was a personal commitment to the fray, from opposition not from government, an expedition, of great bravado and exposure, but great political judgment and luck. It was a journey to the unknown because no one knew what would come of it or who Whitlam would meet. It was personal diplomacy of great political sensitivity,” FitzGerald writes.

FitzGerald concludes his paper with a call for Australia’s current attitude toward China to be imbued with the same courage and independence that drove Gough Whitlam to make his ground-breaking 1971 visit to China.

He warns against Australian endorsement of any policy of containment of China, and argues that in order to preserve its national interests, Australia must be an advocate for a stable, long-term accommodation between China and the United States.

Stephen FitzGerald served as a China specialist within the Department of Foreign Affairs, before becoming Gough Whitlam’s China adviser, and later, Australia’s first ambassador to the People’s Republic of China. With a long and distinguished career at a number of Australian universities and research institutes, FitzGerald has been a leading advocate for Asia-literacy in Australian schools and universities.

The Whitlam Institute within the University of Western Sydney is a leading national centre for the dialogue and debate on public policy - it is a non aligned think-tank for the people, working to ignite debate, strengthen discussion and enrich policy development in Australia.

The project ‘Gough Whitlam and the road to establishing formal relations with the People's Republic of China: the significance for contemporary Australian-Chinese relations’ is supported by the Commonwealth through the Australia-China Council of the Department of Foreign Affairs and Trade and is a part of the program to celebrate the 40th Anniversary of the establishment of diplomatic relations between Australia and the People’s Republic of China.

The Coup that Laid the Fear of China (opens in a new window) is available to download.