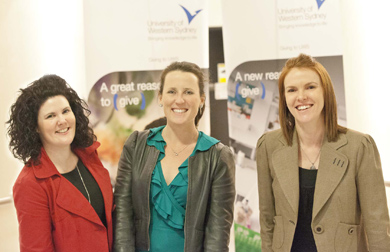 Some of the University of Western Sydney’s most outstanding science and health students have been acknowledged at the Combined Schools Prize Presentation.

Students from the School of Medicine, School of Nursing and Midwifery and School of Science and Health who exhibited outstanding achievement in the 2011 academic year were presented with Dean’s Medals and Donor Prizes on Tuesday 3 July at the Campbelltown Campus.

39 Dean’s Medals were presented to students who placed within the top two per cent of their cohort at the completion of their degree in 2011.

In a message to award recipients, Professor Rhonda Griffiths AM, Dean of the School of Nursing and Midwifery, says the students recognised at the presentation have been singled out for their academic achievement and potential.

“Completing your university degree is an achievement, to be recognised as a student who has excelled in your studies is an honour,” says Professor Griffiths. “As a recipient of these awards, you have also been identified as a future leader of your profession.”

40 students also received Donor Prizes from a variety of community organisations and individual donors in recognition of their achievements over the 2011 academic year.

Professor Gregory Kolt, Dean of the School of Science and Health, was able to highlight the integral role donors play in the recognition of student achievements.

“Congratulations to all of our prize winners,” says Professor Kolt. “We also thank our generous donors, who without their support, these prizes would not be possible. We value their input and contributions to our University and the ongoing support they provide.”

For many of the students recognised at the presentation, the awards come after their graduation and are a special acknowledgement of their hard work and dedication to their education. Many of the students from the School of Medicine recognised were part of the first cohort of UWS medical students who graduated in December 2011.

“We are very proud to be recognising the achievements of students across academic excellence and professionalism, both of which are highly valued by our staff, conjoint supervisors and future patients.”

The Presentation concluded with a musical interlude by Alex Garner and Danielle Klingberg, second year School of Medicine students and an address from Professor Griffiths.