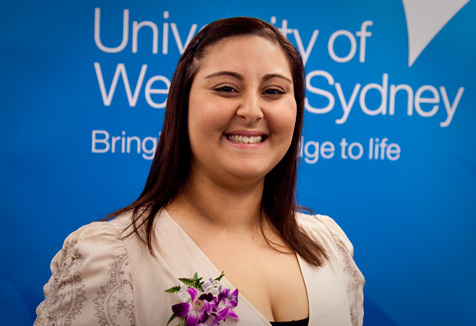 Now in its ninth year, the University of Western Sydney established the awards as a way to recognise the significant contributions and achievements of women from the Greater Western Sydney region.

Christa Anthony knows full well the positive impact that winning the award can bring. Christa, a full-time counsellor and case manager with the Penrith Women's Health Centre and founder of Studio Dance NSW, was this year's winner of the Young Women of the West Award.

Her performing arts school, established in Kings Park in 2009, caters for more than 120 students and is dedicated to making the benefits of dance and drama accessible to everyone.

Her studio welcomes students of all ages, offers 'bonus' classes for free to help families, especially those from disadvantaged backgrounds, and encourages students with special needs by treating them the same as their classmates, irrespective of their skills and abilities.

Christa says winning the prestigious award among such worthy finalists was humbling.

She has used the monetary prize that was part of the award to extend her dance studio to help even more members of the community, offering more classes in dance, acrobatics and special needs jazz classes.

"These children are truly special, not because of their needs but because of the joy they bring to others. Seeing a wheelchair-bound, severely disabled child who barely makes eye contact who can now lift her head and move her hands to music is something that is just magical – as is the joy on the faces of the other special needs students while they learn to dance."

To suit the Awards criteria, nominees must live and/or work in Greater Western Sydney; demonstrate leadership in their field of endeavour; and contribute to improving the lives of people in the region.

For an official nomination form and more information, visit: http://www.uws.edu.au/womenofthewest

Entries close Friday 14 December 2012. The winner will be notified in February 2013 and publicly announced at the UWS International Women's Day celebrations in March 2013.