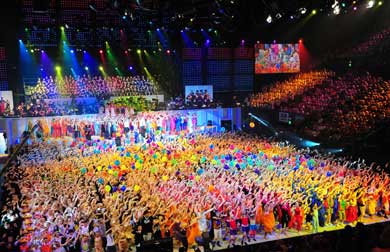 The Schools Spectacular is one of the world's biggest annual youth variety events, where some of the biggest names in Australia's entertainment industry have made their stage debut.

As a Major Sponsor of the Schools Spectacular, the University of Western Sydney has now announced a scholarship to recognise some of its most talented performers and assist them in their creative journeys.

The UWS Talent Development Scholarship provides $2000 to six students from Greater Western Sydney who are participating in the 2011 Schools Spectacular and who have demonstrated a commitment to their field of performing arts.

The six high-achieving Year 11 and 12 students selected as recipients this year are:

UWS Vice-Chancellor, Professor Janice Reid, says the University is delighted to support this special event and be part of the broader Schools Spectacular community.

"Schools Spectacular is a wonderful showcase of the talent within our public schools. For many young people, it is an inspirational and exciting experience that has a profound impact on the rest of their lives," Professor Reid says.

"On behalf of the University, I congratulate the outstanding performers who are the recipients of this year's UWS Talent Development Scholarships. The awards are a way in which we can practically support these talented students, as well as demonstrate our ongoing commitment to fostering the creative and performing arts within our schools and across our Region."

Bill Anderson, Executive Producer of the Schools Spectacular congratulated each of the worthy recipients of the UWS Talent Development scholarships.

Each year, more than 3500 students from more than 400 New South Wales public schools take part in Schools Spectacular - including students from all ages, cultures and backgrounds, from small and large schools in rural as well as metropolitan communities.

Participating in the event involves months of preparations and rehearsals, and culminates in four public performances to lives audiences in the tens of thousands and broadcast into the homes of millions of Australians on ABC TV.

For more information about UWS and Schools Spectacular visit: https://www.facebook.com/schoolsspectacular2011