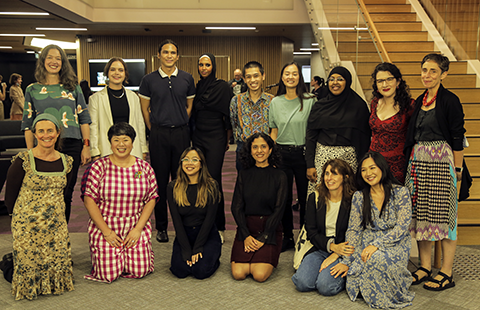 The Wayward Sky is a collection of diverse cultural pieces, written in the homes of the contributors at the height of lockdown and highlights unique perspectives of families, relationships, kin networks and communities.

The authors are all members of a mentoring program for young emerging writers called The Writing Zone, run by Western Sydney University’s Writing and Society Research Centre in collaboration with the Sydney Review of Books.

In a boost to the creative and writing scene of Sydney’s West, the program hosted its first in-person launch since moving online during lockdowns at the University’s Parramatta City campus.

Program officer for The Writing Zone Christina Donoghue said the anthology exemplifies the ongoing resilience of writers and creatives in the region.

“This anthology is a testament to what is possible when time and space is reserved for the creative nurturing of young people from Western Sydney, and when they are allowed to lead their own process and speak with a voice that is unmistakably their own,” said Christina.

“At its beginning, the program quickly shifted from an in-person model to an online environment, and successfully facilitated the creation of a community space that allowed for new forms of relationship building and mentorship.”

Filipino-Australian writer and artist Martyn Reyes is one of the contributors of the publication and said he found the program at a crossroads in his life.

“After leaving a longstanding corporate job, I came across the application for The Writing Zone purely by chance. At that time, I was feeling lost and thought I should channel more of my energy into my writing,” said Martyn.

Martyn said his story, 'Clenched', draws on his own personal experiences of anxiety and mental health – an issue exacerbated by the pandemic for many.

“It's about the suppression of expression, of talking, of saying what you really want to say – the piece is also about impulsivity and recklessness and the harmful impacts it has on relationships,” he said.

Following support and mentorship from the program, Martyn received the inaugural Sydney Review of Books Bankstown Arts Centre Residency in 2020 and more recently, a grant from Create NSW to develop his own manuscript.

“I was really pleased to be a part of a program specifically for young writers from Western Sydney, because there aren’t many supports that exist for us,” he said.

“It was only once the program started that I really understood its value, particularly due to the dedication and passion of the team that runs it.”

Vietnamese-Australian writer and poet Huyen Hac Helen Tran is another contributor whose piece, ‘Fish Gliding in Water’, delves into the effect of addiction on families.

“Simply put, it’s about a father-daughter relationship. But to use the hyphen between the two feels incorrect, as the piece follows more their separate lives,” said Helen.

“The story, which is deeply personal, explores how our parents’ worlds have ripple impacts on our own selves and how we choose to understand ourselves.”

Helen said she struggled with being alone for long periods and turned to writing to provide her with a sense of home.

“As a writer, I aim to be as truthful as I can, and I find joy in trying to pinpoint what it is I am feeling. I often write a whole piece and do not realise what I want to say still the very end. It’s all a puzzle to solve.”

Helen received the 2021 Sydney Review of Books Bankstown Arts Centre Residency and has commenced a Masters in Curating and Cultural Leadership.

“The goal is to keep writing, honing my craft, meeting new people and reading their works – hopefully one day I’ll be able to help others as the program has helped me.”

Of the launch, Christina said: “Celebrating together the good thing – a book – that was created during some of the most psychologically and emotionally charged times of 2020 and 2021, is a reason to look to a bright future for these writers and the industry.”

“To reflect on the realities of life in Western Sydney during a unique part of our modern history in Parramatta – a cultural and creative hub – is also most fitting.”

The Writing Zone is supported by the Crown-Packer’s philanthropic Western Sydney Arts Initiative, and its partners include, SBS Voices, the Sydney Review of Books and Giramondo Publishing.

Learn more about The Wayward Sky here (opens in a new window).