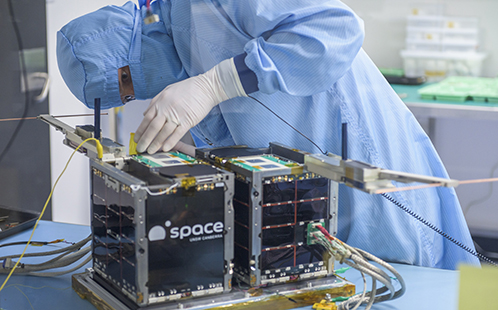 Associate Professor Greg Cohen from ICNS and lead researcher on the event-based camera research project said that the use of Western’s camera payload and algorithms – created specifically for the M2 mission with funding from the RAAF and using sensors supplied by iniVation – will allow Australia to pioneer the use of these technologies in orbit.

“As we've proven with our ground-based space observation work with neuromorphic cameras, the way that event-based cameras work makes them ideal for use in space as they offer the potential to overcome many of the problems encountered with conventional cameras. Neuromorphic event-based sensors have the potential to enable very low power and continuous star tracking, which was the primary reason for their inclusion in this mission.

“This mission will pave the way for us to explore a much wider range of applications of these cameras. In the future for example, we want to track and detect other satellites and space junk from satellites in orbit. The project will also let us explore their use in other space-based tasks - as well as validating that they can be successfully launched and integrated into a small satellite,” said Dr Cohen.

The M2 mission is set to play an important role in expanding the Australian space industry, which is integral to solving the challenges the country will face in the future according to UNSW Canberra Space Director Professor Russell Boyce.

“As we depend on space infrastructure for resource management, secure communications and data collection during extreme weather events and bushfires, building our sovereign space capabilities is critical for Australian security,” said Professor Boyce.

The use of ICNS event-based cameras on this mission is just one of many applications for this significant innovation according to Associate Professor Cohen.

“The potential for neuromorphic event-based cameras has far-reaching impacts for future space missions, managing space tracking, detecting and monitoring space junk, and even for navigation on future deep-space missions to other planets and beyond.

"This initiative is also an example the applied Research and development partnerships Western Sydney University are driving to solve real world challenges, and create new industry with government, tech partners and local businesses,” he said.