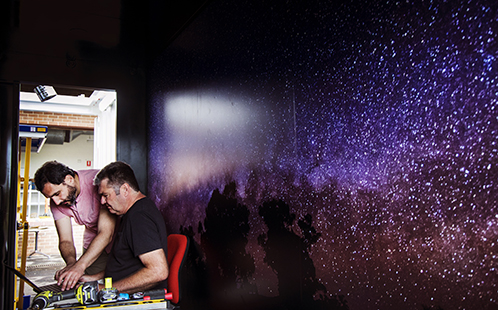 The International Centre for Neuromorphic Systems (ICNS) at Western Sydney University will be involved in the 15-month space imaging project led by Silentium Defence and funded by the Australian Space Agency.

The project combines two complementary Australian-developed space sensors: the ground-breaking Astrosite Mobile Observatory,(opens in a new window) developed by a team of researchers from the University’s International Centre for Neuromorphic Systems (ICNS), and the Silentium Defence MAVERICK S-series passive radar.

Announced by the Minister for Industry, Science and Technology, the Hon. Karen Andrews MP, a total of $1.5 million (AUD) in funding has been granted by the Australian Space Agency for the multi-sensor observatory project.

The new South Australian Space Observatory will be the first of its kind in the Southern Hemisphere – combining sensing technologies as an enhanced space imaging technique, and providing critical data for the Australian and international space industry.

“With tens of thousands of man-made objects currently orbiting in space, the risk of collision between debris, satellites and spacecraft is very real. This has become a serious concern not only for organisations with a commercial interest in space, but also for national and international defence agencies.

“We have developed a dynamic imaging system that runs faster, computes more efficiently, uses far less power and needs less data than ever before to effectively detect and track objects orbiting in space.”

Launched in February 2019 at the Avalon Airshow, the University’s Astrosite has been an example of world-leading research and development capability from the Western Sydney region.The Astrosite project, under the development of project lead Associate Professor Gregory Cohen, was a world first demonstration of the capabilities of neuromorphic sensors for use in Space Situational Awareness.

Acting Vice-Chancellor and President, Professor Denise Kirkpatrick, said the project is yet another example of Western Sydney University’s impact-driven research that is helping to solve real-world challenges.

“We are incredibly proud to showcase Western Sydney University’s research capability and expertise in neuromorphic systems to the world and, through our collaborative partnerships with government and the private sector, help drive the development of new cutting-edge technologies and high-tech industries for Australia,” said Professor Kirkpatrick.

International partner, the Swedish Space Corporation, will combine observations from its Northern Hemisphere location to complement Southern Hemisphere detections and assist with more effective, continuous object tracking across a wider arc of space.

“South Australia is the ideal location for an observatory of this kind as it is uniquely positioned on the cusp of one of the world’s few dark-sky reserves,” said Dr Palmer.

“To be able to provide that capability from Australia for the international space community, using local skills and local technology is an exciting step in defining our nation’s role in the fast-growing industry,” he said.

Work is due to commence on the observatory in September 2020, with a target date for completion, operation, and data collection in July 2021.