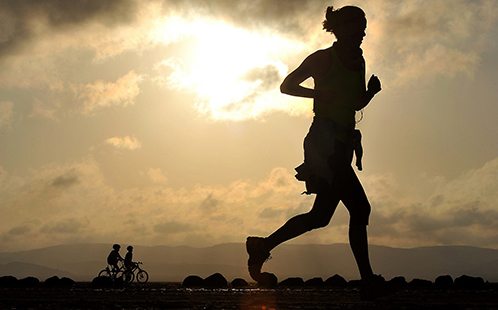 A joint study by researchers from the Chinese University of Hong Kong (CU Medicine), Hong Kong Polytechnic University (PolyU), and Western Sydney University have uncovered the complex workings of the human nervous system which control our ability to run.

As each participant took part in a range of running exercises, either over-ground or on a treadmill. The electrical activities from multiple muscles, as well as the force that the body exerted onto the ground, were recorded.

After data collection, the team used a sophisticated machine learning algorithm to identify fixed co-activation patterns of multiple muscles – known as muscle synergies – that are embedded within the muscle data.

The results, which are published in the journal Nature Communications,(opens in a new window) indicate that the human nervous system is equipped with a mechanism that can flexibly adjust the motor commands for running, depending on the state of the body and the person’s prior running experience.

Professor Vincent Chi Kwan Cheung, the lead author of the study from the School of Biomedical Sciences at CU Medicine, said as muscle activities originate from the brain and spinal cord, muscle synergy offers a glimpse at how the human nervous system generates motion.

“Muscle synergies are believed to be the neural building blocks of movement, functioning like basic alphabets that can be flexibly recombined by the nervous system to result in diverse behaviours,” said Professor Vincent Chi Kwan Cheung.

“Our goal here is to analyse how these building blocks for running themselves may change across age and training groups.”

Associate Professor Chao-ying Chen, a paediatric physical therapist from the Department of Rehabilitation Sciences at PolyU, explained the important considerations for children, who have body-builds that are very different from those of adults, with muscles of weaker strengths and less-developed postural balance.

“The research team discovered that some of the preschoolers’ synergies may gradually reorganize themselves by fractionating into synergies comprising fewer muscles over the years of development,” said Associate Professor Chen.

“From the biomechanical perspective, the preschoolers’ synergies appear to be well suited for running with their less-mature body-builds.”

Remarkably, among the adults, the presences of specific synergy merging patterns are associated with either enhanced or reduced running energetic efficiency.

Professor Roy Tsz Hei Cheung, from the School of Health Sciences at Western Sydney University – who began contributing to this work when he was Associate Professor from the Department of Rehabilitation Sciences at PolyU – said it is notable that some experienced runners with unexpectedly low efficiency actually ran with the efficiency-reducing merging patterns.

“Our analysis is perhaps uncovering some muscle patterns that these runners inadvertently acquired over their training, though they would have to eventually learn to suppress these patterns before they could be the true elites,” said Professor Roy Tsz Hei Cheung.

Dr Ben Man Fei Cheung, who collected and analysed most of these data with the team when he was an MBChB student at CU Medicine, said the study’s findings may allow future researchers to design running training programs or devices that facilitate the learning of these efficiency-enhancing merging patterns, thus helping runners to run for longer with more ease.

“If you are training for your next marathon, you are not just training your cardiovascular fitness, but also your brain,” Dr Ben Man Fei Cheung.