Western Sydney University’s world-class Solar Car Team will take to the open road as part of an exciting roadshow through regional New South Wales from 26 to 30 April.

Driven by more than the sun, the student-led team will take their passion for sustainability and education to the Illawarra, Goulburn, Bathurst, Molong, Dubbo, the Hunter Region and Eastern Creek, travelling 1300 kilometres as part of a round trip starting at the University’s Kingswood campus.

The students will drive their most successful car to date ‘UNLIMITED 2.0’ – which won the prestigious American Solar Challenge, in sections of the trip to kick-off preparations ahead of the Bridgestone World Solar Challenge 2023, visiting several primary and high schools and iconic racing venues along the way.

Brad Nadalini, Team Manager and Project Officer, said despite the challenges presented by the pandemic, the team was thrilled to be back on the road doing what they do best.

“We’re excited to take this opportunity to travel to regional NSW with the aim of inspiring the next generation of sustainable thinkers and getting ‘race ready’,” said Brad.

“We will be touring various renewable energy zones, running school and community engagement events and doing laps at various race tracks to spread our message about renewable energy and the future of transportation.

“History has shown we’re capable of designing and building world-class solar cars but ultimately, it’s the team that wins the race. The roadshow will provide us with a fantastic opportunity to train our new recruits in running a solar vehicle ‘on road’, which will help us develop the skills needed to take home the trophy in the 2023 Bridgestone World Solar Challenge.” 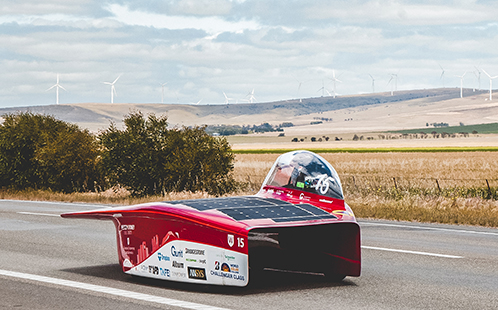 The roadshow will pass through the NSW Renewable Energy Zones of Goulburn, Bathurst, Lithgow, Dubbo and the Hunter Region, to stimulate conversation around sustainable solutions. In addition to sustainability, the roadshow will also encourage participation in Science, Technology Engineering, and Mathematics (STEM) through events hosted by the team, gearing up the leaders of tomorrow.

Genevieve Bryant, an integral part of the team’s Media and Communications division, said women are making significant and growing contributions to STEM.

“We’re seeing an increasing number of female team members – mechanics, drivers and creatives – who are all making waves in our team and as part of international solar car racing,” said Genevieve.

“Solar Car is a fantastic hands-on project that we share with schools to encourage further participation in the STEM disciplines. We’re very proud and excited to take the solar car to students in these regions.”

Western Sydney University’s Solar Car Team is made up of 26 students from the fields of Engineering, Industrial Design, Computer Science and Visual Communications. The students manage every aspect of the production and design of the vehicle, as well as sponsorship, marketing and the administrative elements of their involvement in international competitions.

Producing four cars, over a rich ten-year history, the team placed 6th overall and were the first Australian team to finish the Bridgestone World Solar Challenge in 2017. In 2018, the team became the first international team to win the American Solar Challenge, beating Michigan University’s 18-year winning streak. The team also broke the record in 2019 for the lightest solar-powered vehicle ever to race weighing only 116.8 kilograms.

Supported by the School of Engineering, Design and Built Environment at Western Sydney University, the team utilise world-class facilities at the Advanced Manufacturing Precinct based at Kingswood campus to manufacture their high-tech vehicles. 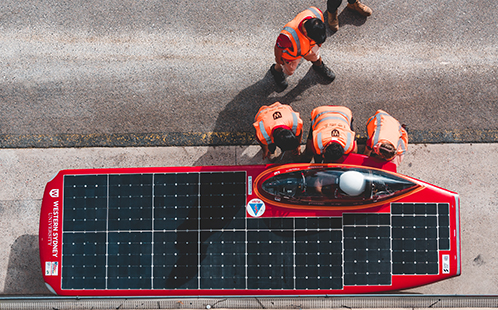