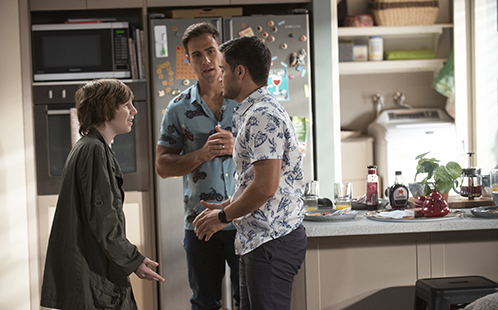 On the set of Neighbours:  Actors Takaya Honda, Ezra Justin and Matt Wilson

A Western Sydney University expert in developmental trauma and out-of-home care has lent her expertise to one of Australia’s most popular, long-running drama series – to ensure that an important new storyline provides an accurate depiction of foster families in Australia.

Dr Stacy Blythe is a Registered Nurse and Senior Research Fellow in the University’s School of Nursing and Midwifery. She is also Deputy Director of the Translational Research and Social Innovation (TReSI) Group, based at the Ingham Institute.

Dr Blythe’s research focuses on the health and well-being of children in out-of-home care, as well as the wellbeing of birth and foster families.

When Neighbours decided to introduce a new storyline, to highlight the issues around adoption and foster care in Australia – Dr Blythe was asked to provide advice and guidance, from the initial story planning phase through to final scripting.

The result was a new character, Emmett Donaldson (played by Ezra Justin), who made his debut on Neighbours on 10 June 2020 as the temporary foster child of same-sex couple David and Aaron.

Dr Blythe said the new Neighbours storyline will go a long way towards raising awareness, and humanising the experiences of young people and their families.

“Young people in out of home care and their families face some serious challenges, and the out-of-home care system in Australia is in need of significant reform,” said Dr Blythe.

“In order to demonstrate to Government that we need reform, we need more advocates to lobby for change. And the first step is to raise more awareness of the issues and challenges that are regularly encountered in the foster care system.”

Dr Blythe recognised that Neighbours is a fictional drama series that required ‘entertainment value’ – but said the producers were very committed to ensuring that Emmett’s storyline was as accurate as possible.

“The Neighbours team were very receptive to my feedback, and worked to ensure that the experiences and behaviours of Emmett, David and Aaron provided an accurate representation of out of home care in Australia,” she said.

Dr Blythe said critical elements to the storyline were Emmett’s ‘over-the-top’ reactions when he loses his temper, as well as David and Aaron’s supportive and non-punitive responses.

“Emmett is demonstrating a range of behavioural issues, and at one stage he throws a cricket ball through a window. It was a delicate balance, to show that children in foster care can have behavioural issues, whilst not representing the children themselves in an overly negative light,” she said.

“It’s important to understand that Emmett’s reactions are not intentional moments of delinquency – his behaviours are symptoms of previous trauma that he has experienced. And the only chance that Emmett has for a positive outcome, is if his trauma is recognised, and he receives understanding, love and support.”

Deborra-Lee Furness, Founder of Adopt Change, on the set of Neighbours

Dr Blythe said a Simple Adoption order enables children in care to find a permanent place within a foster family, without needing to sever all legal connections with their family of origin – a practice that Emmett’s character on Neighbours will help to demonstrate the importance of.

“Emmett, like so many Australian kids, is drifting through the system. He goes from placement to placement, and doesn’t have the security he needs,” she said.

“Whenever possible, efforts should be made to support families and keep them together. When this isn’t possible, it’s important to give them stability, security and a sense of belonging. That is why reform of the out of home care system in Australia is so desperately needed.”

Adopt Change was founded by Deborra-lee Furness – who also assisted, by directing the initial episodes featuring the adoption and foster care storyline on Neighbours.