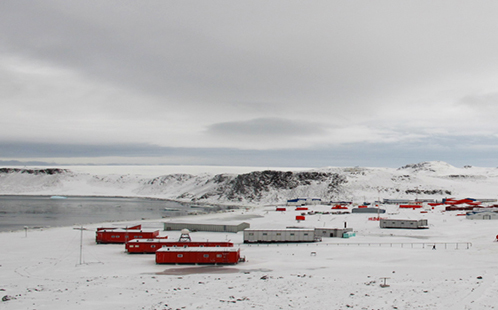 Five young leaders from Antarctic ‘gateway cities’ will travel to the continent from 12-19 February as part of an international research project led by Western Sydney University with its partners, including the University of Tasmania and Chilean Antarctic Institute (INACH).

During the journey (opens in a new window), the leaders will visit international research stations and take part in discussions about how their cities can act together as custodians of the region.

They will also commit to developing a proposal to form an Antarctic Youth Coalition when they return home, with young people in other countries, which they will take to local governments and international NGO’s for support.

Project researcher Professor Juan Francisco Salazar, from Western Sydney University’s Institute for Culture and Society and School of Humanities and Communication Arts, will travel to Antarctica for the fourth time as part of the expedition. He explains that as political, economic and environmental pressures on the region increase, the Antarctic gateway cities are becoming critical to its future.

“Antarctica is not only the continent of science and a natural laboratory, but also a social laboratory for how humans might inhabit extreme environments in sustainable ways,” he says.

“If we see Antarctica as a barometer from which to take a measure of the planet, these five cities have a challenge and a unique opportunity to become global leaders in spearheading new ways of custodianship and international cooperation, while developing novel forms of urban identities for their cities in relation to the Antarctic.”

Co-researcher Professor Elizabeth Leane, from the University of Tasmania, says that the expedition is vital to building a strong network of partners who will help to care for Antarctica.

“I know from my own experience how a journey to Antarctica, even a short one, can create lasting bonds. During the expedition, the young people won’t just explore Antarctica – they will also explore what they and their cities have in common.

“These cities are often seen as competitors, but their citizens can learn from each other and work together to raise awareness about the region to their south. These five young people will be a key part of that process. Like Antarctica itself, this expedition is about international cooperation.”

Chosen from close to 100 international applicants, the participants (opens in a new window)demonstrated a genuine commitment to their cities and to Antarctica, and will begin their journey with Professors Salazar and Leane in Punta Arenas on 9 February, where they will meet with local authorities and the local press, before continuing to Antarctica.

The team will travel with INACH to Julio Escudero Base on King George Island, Antarctica for seven nights.

During and after the expedition, the representatives will share their experiences through short videos and visual diaries, in collaboration with Proboscis Studio (London).

An online serious game, ‘Antarctic Futures’ (opens in a new window), developed with youth in all five cities, engages young people in seeing how global policy responses to climate change may affect the region.

Funded by an Australian Research Council Linkage Grant, the Antarctic Cities and the Global Commons: Rethinking the Gateways (opens in a new window)project aims to show how ecological stewardship, political cooperation, cultural vibrancy and economic prosperity can mutually reinforce a safe and sustainable future for Antarctica.

It is the first program to investigate how the gateway cities might both reimagine and intensify their relations to Antarctica and each other.

Research findings will be presented in Hobart in August during the Australian Antarctic Festival and Scientific Committee on Antarctic Research (SCAR) conference.