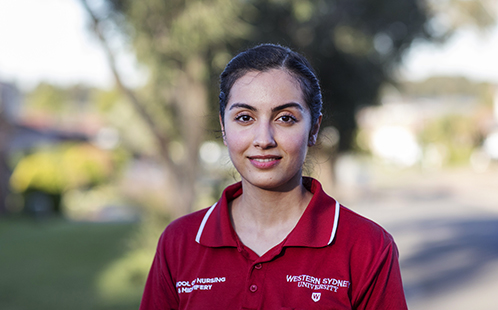 The first time that Hadeel Alnashy used a computer was at university.

The 25-year-old student, who is in her third-year of a Bachelor of Nursing degree at Western Sydney University, is now not only tech-confident but is more than qualified in many life-saving procedures.

Hadeel arrived in Australia in 2015 as a refugee. Her family initially fled Iraq for Jordan, following religious prosecution, and waited two years to come to Australia.

“We were forced to leave Iraq, like hundreds of others. My father lost his job. I lost my dream of becoming a doctor. I worked so hard but everything was turned upside down. We left our relatives. We left the place where we were brought up.”

Unable to work or study while living in Jordan, Hadeel said the experience made her more patient, and more passionate about what she wanted to achieve in life.

“I learned that whatever I lost could be replaced with better things; I learned how to reflect on my actions in order to do better next time and I learned how to approach people, and to be happy to help others.”

Now based in south-west Sydney, Hadeel’s family first had to quickly master a second language and culture.

“I looked for a job for so long but couldn’t find one as my English wasn’t good enough. I didn’t have any experience at the time.”

After enrolling in an English course at Bankstown Senior College and completing a Foundation Course in Health Science and Nursing through Western Sydney University’s The College, Hadeel’s fortunes began to change.

“After one year of intensive study, I told my school counsellor that I was on track to do medicine in my country, and she told me about pathways to further study. I chose to do a Foundation Course in Health Science and Nursing.”

“When I started the course, it was a challenge and I cried on my way home because I felt lost. But, with support from The College, my marks began to improve! And it was at that time that I realised language is not a barrier to being successful.”

Hadeel went on to receive an award for academic merit from The College achieving a GPA of 9. She was invited to give the student address at her graduation ceremony.

“A turning point was 2017, and it was a big move for me towards a good future. From there I got accepted into my nursing degree,” she recalls.

“It’s always about taking the first step in learning, it makes the other steps easier to take. I won the Crescent Foundation Leadership Scholarship in my first year of nursing. No one believed that I would get a scholarship as I had been unsuccessful before, but with determination I achieved it.”

After graduating from her degree, Hadeel hopes to work as a nurse in a hospital and gain more practical experience. Inspired by her teachers, including her course coordinator at university, she plans to return to complete postgraduate study and become a nursing tutor.

Hadeel’s family continues to encourage her in her studies and in return she supports them.

“My dad always tells me to believe in myself. He has a master’s degree in architecture but couldn’t find a job here. Despite that, he’s studying a related course at TAFE. My mum has been pushing herself forward and improving her language –  I’m proud of them both.”

“My siblings want to be healthcare workers in the future. So my family and I are trying to be successful members of the society, to prove that with hard work you can achieve your goals.”