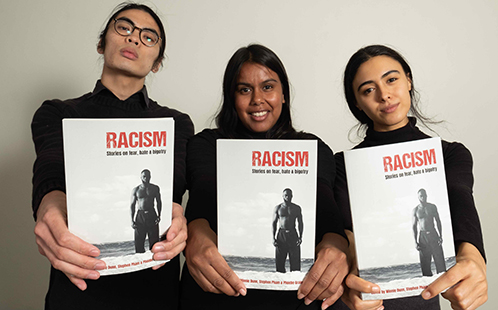 Sweatshop: Western Sydney Literacy Movement has released a new publication which showcases thirty-nine stories by Indigenous writers and writers of colour. In this powerful, urgent and timely anthology, each of the writers share their personal experiences with racism, xenophobia and prejudice.

As the creative team behind the nationally renowned literacy movement, Sweatshop – founded by Western Sydney University alumnus Dr Michael Mohammed Ahmad – the young editors believe that literature is fundamental in the fight against racism.

In a joint statement, Dunn, Pham and Grainer said, ‘Amid the ongoing deaths of Indigenous people in custody, the Black Lives Matter movement, the rise in anti-Asian violence, the aftermath of the horrific 2019 Christchurch massacre, and the mistreatment of thousands of refugees in offshore detention, we can no longer pretend that racism does not affect the lives of millions of everyday Australians. This book is an opportunity for Australians, all Australians, to finally have an honest conversation about the demon of fear, hate and bigotry that too often tears our nation apart.’

The new anthology is part of an ongoing push by Sweatshop to bring more stories from culturally diverse communities to the forefront of Australian literature. Racism: Stories on Fear, Hate & Bigotry has been developed by Sweatshop Literacy Movement in partnership with Campbelltown City Library as part of the Campbelltown Youth Literacy Initiative for Diverse Writers. Proudly supported by the Crown Resorts Foundation and Packer Family Foundation. Sweatshop is also supported by I.C.E., the Australia Council for the Arts, Diversity Arts Australia and Red Room Poetry.

Racism: Stories on Fear, Hate & Bigotry is out now and can be purchased directly from the Sweatshop website (opens in a new window).