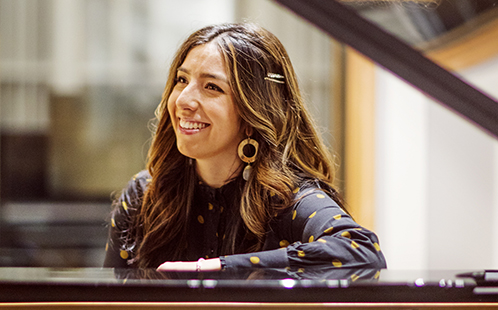 When Chloe Hulewicz was 3 years old, her parents bought her a toy piano. After noticing how much she loved playing it, they organised lessons when Chloe was 5 – and she hasn’t stopped playing since.

“Any minute of the day I had free I was on that piano ‘banging away’, as my Mum would say,” said Chloe.

“When I was at school I would wake up at 6am so I could play before I caught the bus. Then when I got to school, I’d go to the music room and play until school started and then I was back there at lunchtime! I just fell in love with music and couldn’t go a day without playing my piano.”

Chloe is a graduate of the Bachelor of Music degree and honours program at Western Sydney University, and will this year be awarded the Doctor of Philosophy degree. She has performed at the Sydney Opera House, and in 2018 the Penrith Symphony Orchestra performed one of her pieces, Nieznana Podroz (Unknown Journey), as part of their 30th anniversary gala concert. Since commencing with Western in 2011, Chloe has been presented with numerous opportunities to challenge and expand her musical skills and sensibilities.

“In 2015, thanks to my PhD supervisor Dr Bruce Crossman, I was able to collaborate with and compose for the Sydney Youth Orchestra. I found this experience so rewarding as it challenged me to explore new instrumentation. It was also the first-time people outside the university performed my music.

“Looking back now, I believe it was this opportunity that not only paved the way for me as a composer, but it also opened the avenue for conducting and that alone, has created so many amazing experiences,” said Chloe.

Chloe was also given the opportunity to travel to Poland in 2017 to conduct field research as part of her Doctorate.

“That trip was life changing. Being from a Polish background, it was incredible to be immersed in the culture and identify with my heritage in a more personal and meaningful way. Places like Auschwitz, which I had only heard stories of, became real and had a profound impact on me.

“The music scene in Poland was also unbelievable. From concerts almost every night, to the music I would hear walking down the streets of Krakow or old town, Warsaw, to visiting the Frederic Chopin University of Music to speak with fellow musicians and lecturers. It all ignited a flame within me.  It was during this time that I finally found out who I was as a musician and my love of piano playing was deepened to a level I didn’t know was possible,” said Chloe.

Chloe’s Doctorate celebrates her Polish heritage and is an exemplar of a body of work cementing her as one of Australia’s brightest young composers.

“My Doctorate draws upon my Polish heritage and this idea of the weight of Polish sadness, I took Frederic Chopin’s mazurka (originally written only for piano) and reinvented this style of music through juxtaposed filmic ideas found in Charlie Chaplin’s silent film. I did this by composing for different instrumentation. This opened a door to explore several textures and timbres that were not possible on the piano, and I believe that these additional elements have really brought my music alive,” said Chloe.

With the support of Western Sydney University, Chloe has now had all doctoral compositions performed by leading ensembles and composers, including: the Sydney Youth Orchestra; Michael Keiren Harvey; Penrith Symphony Orchestra and The City of Holroyd Brass Band.

Chloe is currently working with the Western Sydney Youth Orchestra and exploring further opportunities in conducting, performance, academia and teaching. Reflecting on her final year at Western, Chloe encouraged future and current music students to be curious and passionate.

“You need to be passionate about whatever field of music you want to pursue because if you have passion, the desire will always be there. I strongly believe that without passion, there is no success.

“I would also encourage students to spend time finding their voice as a musician. What I mean by that is understanding what type of musician you are, what you want to be and be open to what you know, being challenged.

“It is so easy to get caught up in a bubble and miss out on opportunities that enable you to become a better musician, but more importantly, grow, so don’t ever so no to something that comes your way, because it could be the start of the best thing you’ve ever done,” said Chloe. 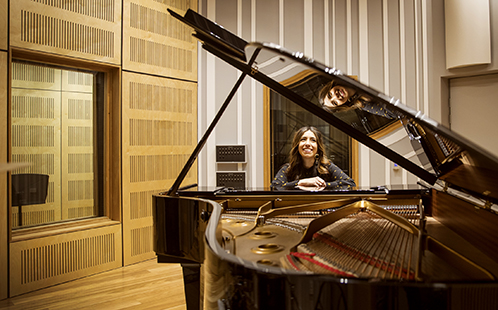