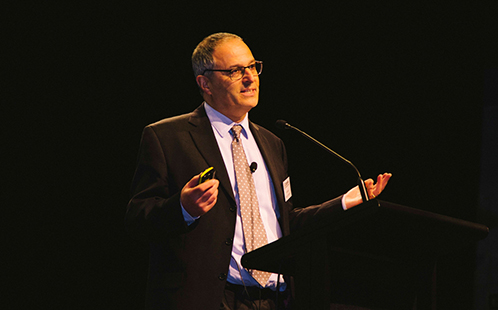 Distinguished Professor David Simmons has been recognised by the American Diabetes Association (ADA) for outstanding contributions to the field of diabetes and pregnancy.

Professor Simmons, from the School of Medicine at Western Sydney University, is the recipient of the Norbert Freinkel Award for 2020.

The prestigious Award is given in memory of Professor Norbert Freinkel – whose pioneering work led to the treatment of diabetes in pregnant women being considered more scientifically.

In accepting the award, Professor Simmons delivered the Norbert Freinkel Lecture at the virtual 2020 ADA Conference on Saturday 13 June 2020.

With a career spanning more than 30 years, Professor Simmons is an endocrinologist, clinical epidemiologist, and a global leader in diabetes research.

Since joining Western Sydney University in 2015, he has worked with the communities of Western Sydney to help find better ways for people to manage their diabetes and reduce the incidence of disabling and life threatening complications.

He is currently the Chief Investigator of the world’s largest trial of how to treat gestational diabetes diagnosed early in pregnancy, as well as a trial that is working to prevent diabetes and its complications in Sydney Pacifika communities.

He was previously the trial coordinator for a European Union funded research program (DALI) to prevent gestational diabetes across nine European countries. In the United Kingdom, he completed the world's largest study of community-based peer support for helping those with type 2 diabetes.

He was also the lead diabetes consultant at the Institute of Metabolic Science and Cambridge University Hospitals NHS Foundation Trust in the United Kingdom; between 2003-2007, was the inaugural Professor of Medicine at the University of Auckland Waikato Clinical School, New Zealand; and at the University of Melbourne from 1998-2002 was the Foundation Chair in Rural Health.