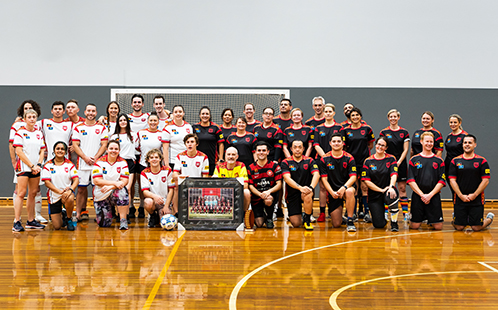 This year's student and staff teams

Western Sydney University Indigenous staff and students put down their pens and pulled on their shin pads to compete in the 2021 ‘Staff vs Student’ Soccer match.

The second annual event was held at the Penrith Valley Regional Sports Centre and provided students, staff, Elders and alumni the opportunity to reconnect over a game.

The match, refereed by Professor Kevin Dunn, Pro Vice-Chancellor (Research) at the University, was nail-biting. The students were up 3-1 in the first half before a concerted effort by the staff team saw the score swing around. The staff team defied all odds and came away eventual winners with a score of 4-3.

The captain of the winning team, Josh Mason Acting Director of the Badanami Centre for Indigenous Education, said this year’s Indigenous soccer game was a huge success.

“It was a day for coming together and building valuable connections between our students and staff here at Western Sydney University,” said Josh.

“Thanks to our students who got involved and helped contribute to what was a great game and a massive congratulations to our staff team who won the game.”

“I would like to thank Professor Michelle Trudgett, Acting Senior Deputy Vice-Chancellor, and her team for organising the event.  I am looking forward to doing it all again next year.”

On the day, Western Sydney Wanderers FC representatives were present to assist and inspire the players, and to award the Best and Fairest Player trophy to Chantelle Khamchuang, Badanami Student Success Officer and PhD student.

In addition, student Luke Hodge won a signed picture of the 2020 Wanderers team, and student Tanya Satori won a six seated corporate reserve ticket to a Wanderers game as part of a raffle.

Luke Hodge, captain of the Indigenous student team, offered his congratulations: “To all involved in the preparation and execution of such a deadly event, thank you. Congratulations to the staff team on their win. It was a fun, competitive game for all.”

“Congratulations to all who were involved. There were a number of very talented players on both sides, but special mention must go to Corrinne Sullivan, who delivered a sensational game in goal. Once again, Professor Kevin Dunn demonstrated his skill and knowledge of the game as referee, and it was great to hear both staff and students already making their plans to join in the 2022 game,” said Fiona. 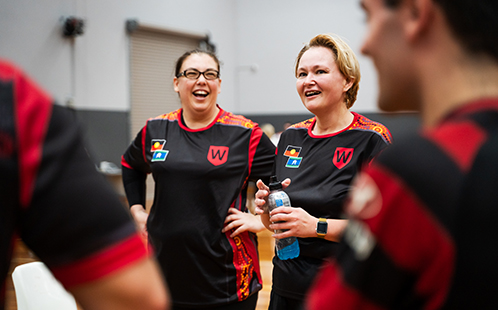