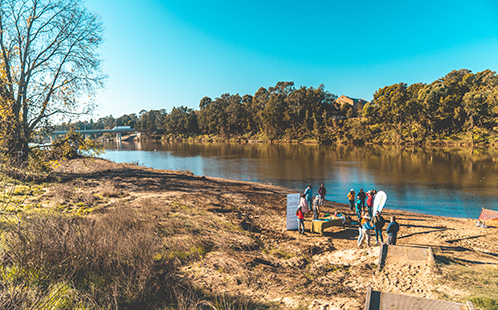 Western Sydney University researchers and students, in collaboration with Streamwatch and Greater Sydney Landcare, have joined community volunteers as part of a hands-on workshop to assess the number of microplastics present in the Hawkesbury-Nepean River.

The first ‘Hawkesbury-Nepean Riverkeeper Community Day’ saw the group come together on World Environment Day, 5 June, at Windsor Beach – a popular recreational area in the Hawkesbury region that was recently impacted by significant flooding.

Dr Michelle Ryan from the Western Sydney University’s School of Science led the workshop and explained as much of current research into microplastics is focused on the oceans, there is a need to explore the impacts of this emerging pollutant on freshwater systems, including the Hawkesbury-Nepean.

“We were delighted to see a number of community members from a variety of backgrounds attend the workshop. Some volunteer regularly and others were just interested community members who care about improving the health of the waterway,” said Dr Ryan.

“On the day, we split into four groups and ran transects on the high tide line. We then sifted for microplastics by putting sediment and sand through different size sieves into trays which we took back to the lab to examine under the microscope.”

“The community also had the opportunity to look at samples from Yarramundi and Sackville, in addition to Windsor Beach, which had been collected and dried a few days previously.”

The data collected will be formally analysed by Dr Ryan and her team at lab facilities at the University’s Hawkesbury campus. The findings will inform the first ‘report card’ on the waterway to be released later this year.

“Indicative results show the community found up to six pieces of microplastic per gram of riverbank – this number is less than previous counts – and we believe the difference could be due to the recent flooding which resulted in a sand dump from upstream,” commented Dr Ryan.

Catherine Welsh was one of the students on hand to support the day. Catherine is studying the Master of Philosophy at Western Sydney University's Hawkesbury campus and aspires to work in conservation.

“It was a great experience to be back in the field and the lab and to help guide members of the community through sampling.  It also was lovely to connect with other students on the day that were helping out who were passionate about conserving the waterway,” said Catherine.

“The Hawkesbury River is such an important river, it is used for agriculture, drinking water, recreation, and has cultural significance.”

“It’s vital to engage with the community and educate them on why we should protect our waterways, not only for us but for the biodiversity that live within the river, like the platypus.”

Serene White studies the Master of Research and travelled from Gosford to help out on the day and contribute her research expertise.

“I helped set up the equipment at Windsor beach in the morning and then guided a group to collect four samples of sand. Later in the day at the lab, I helped the community members identify any microplastics they found under the microscope,” explained Serene.

“These types of events are a great way to enrich my experience as a student as it shows research beyond a classroom setting. It really puts research in a practical sense, and it is a great experience for a young researcher like me.”

“Citizen science is such a fundamental aspect of conservation as most research would not take place if it were not for community support. Holding community days is a great way to develop a sense of pride in the community to look after their local environment which in turn helps to carry on the legacy of research.”

Find out more here (opens in a new window). 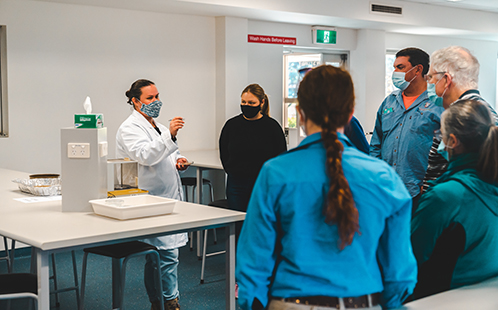