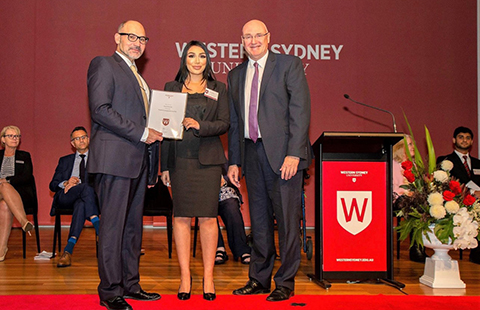 Brydens Lawyers has renewed its commitment to supporting the next generation of lawyers, as part of a continuing scholarships program at Western Sydney University.

The Brydens Lawyers Scholarship has supported five talented students through to graduation to date – including students based in Liverpool – with a further five scholarships announced through a pledge of $187,500.

Founded in South Western Sydney, the firm has contributed over $400,000 to life-changing student scholarships and health and medical research at Western Sydney University.

Dean of the School of Law, Professor Anna Cody, thanked Brydens Lawyers for their ongoing support of the University and of aspiring lawyers through the scholarships program.

“Western Sydney University is delighted to continue its partnership with Brydens Lawyers – one of the largest and leading law firms in New South Wales with a long association with the region,” said Professor Cody.

“The scholarships program has provided invaluable support and mentorship to many students, including those experiencing hardship, and on behalf of the University, I thank Brydens Lawyers for their generosity and continued support.”

Principal of Brydens Lawyers, Lee Hagipantelis, said it was an honour and pleasure to support a further five scholarships through the School of Law at Western Sydney University.

“We have been able to see, firsthand, the importance of such scholarships having met the recipients and been privileged to watch their progress through their studies leading to graduation and subsequent employment as a Solicitor of the Supreme Court of New South Wales,” said Mr Hagipantelis.

“Sponsorship of these scholarships has brought enormous professional and personal satisfaction to all of us at Brydens Lawyers. It is an opportunity for us to give back to our local community and to recognise and benefit those students who may otherwise have been challenged in committing to a five year law degree.”

Prairiewood resident Janet Dunlop is one of the graduates who have benefitted from the scholarships program. Now a solicitor at the NSW Department of Communities and Justice, she said receiving support from the firm opened up many opportunities.

“I was working full time for many years while studying so the scholarship enabled me to take a short break from working and really focus on my studies. I was able to complete an internship with a Local Court Magistrate in regional NSW, where I would travel once a week for a semester and return to Sydney for my classes,” said Janet.

“Through the scholarship, I was able to network with other like-minded peers and Mr Lee Hagipantelis, the principal of Brydens Lawyers, who gave me an insight into his background and legal journey. Overall, the scholarship opened the door to further opportunities and assisted with fast-tracking my degree.”

In pursuing a career as a lawyer, Janet said her grandmother and parents were her biggest inspirations.

“Unfortunately they didn’t have the financial means to further their educations. My grandmother always said to me ‘go to university and complete a degree because it is something no one can ever take away from you and the skills you learn are skills you can take with you anywhere in the world’ – her words have always been in my head and continue to motivate me to this day."