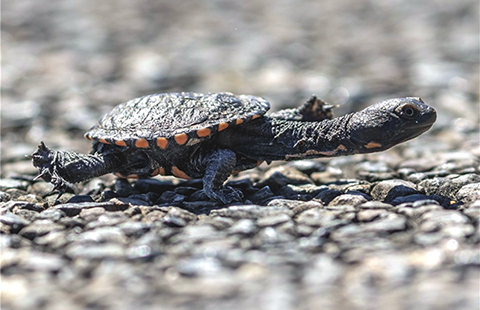 An ambitious project to return one million turtle hatchlings to waterways across Australia and create an army of citizen scientists through community conservation will be launched during November’s ‘Turtle month’.

The ‘1 Million Turtles Program’ – the largest initiative of its kind undertaken across Australia – will train members of the community to report freshwater turtle sightings using the TurtleSAT mobile phone app and website, with November a crucial month for turtle activity.

The program has received close to $500,000 in funding through the Australian Government’s Citizen Science grant program.

Dr Ricky Spencer, a co-project lead from Western Sydney University’s School of Science, said urgent action is needed, with turtle species declining by up to 91 per cent over the last 40 years.

“Turtles are a much loved Australian animal, but we are seeing numbers diminish and a risk of extinction due to increasing urbanisation, predation and disease,” said Dr Spencer.

“Not only are turtles iconic, but they are also of major importance in river ecosystems and a loss of abundant scavengers will have serious effects on general river health.

“We’re calling on citizen scientists to help us turn this problem around by reporting turtle sightings, as well as engage with and co-create community conservation strategies throughout Australia.”

The program will be launched at 6pm on 1 November at an online event for the public, with special guests Tim Faulkner from the Australian Reptile Park and Jason Wilson from the Commonwealth Environmental Water Group.

According to co-lead Dr James Van Dyke from La Trobe University, turtle populations are in crisis, including in some of the nation’s most well-known waterways.

“While there are still turtles to be found, most of them are old and there are few juveniles,” said Dr Van Dyke.

“Without the next generation of turtles coming through, the populations will rapidly decline and potentially die out.

“The freshwater turtle population of the Murray-Darling Basin has fallen significantly since the 1980s for example. At least two of the three River Murray species are on route to extinction.”

The 1 Million Turtles Program will primarily be supporting on-the-ground community conservation activities to increase juvenile turtle recruitment throughout the country. From floating Turtle Islands to learning to create simple nest protectors, the program will empower citizen scientists to engage with their local wetlands.

To register for the launch and find out more about the program, visit the web page (opens in a new window).