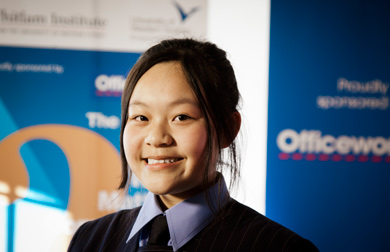 The Voice of the Whale

The pastel sunlight of breaking dawn washed over the waves that rocked gently back and forth, sliding over each other like liquid silver. Somewhere, in the silent caves of ocean, our voices reverberated as a hymn of the sapphire seas, tender as morning light. Our family of whales was the soul of the ocean.

But the serenity did not linger forever. Soon the throb of an approaching engine rumbled, its bow slicing through the blue water glass. And the unmistakable outline of a harpoon gun was visible through the shroud of mist.

An arrow blasted out and pierced itself into the rubbery flesh of an unsuspecting Minke whale. My mother.

She gave a low moan as she nudged me away from the perilous water surface. But above us, a flat-face peered down at us with unfeeling eyes; eyes so empty of warmth. His jutting-out jaw curled into a sneer on his gaunt face as he adjusted his gun again.

BOOM! My mother struggled on to plunge down to the safety of the deep, but her energy sapped, and she was taken. A chain hauled her up, and I watched with terror-glazed eyes as she writhed on the deck, blood streaming out of her as the flat-faces used their blades to gore and gouge her vulnerable body.

The water was now red; a deep crimson red, full of life that was now exposed to the sharp cold sting of the bitter air that wafted outside the harmony of the depths of the ocean. The engine triggered again. I followed the ship for hours, calling out to her until my voice was hoarse. But there was no lilting answering lullaby. There was only blood.

A lone reminder of song echoed in the ocean...

Listen. Listen to the lonely sea breeze that hovers over the sea of broken mirrors, in search of that lively melody that once blended in with the sigh of the wind and the gurgle of the shore. The melody that once rang out so often before the arrows started firing. The song of the whales.

In the midst of the ocean, that isolated whale calf is still wandering, having no idea that its mother had just been turned into a range of humanoid objects; make-up, oil lamps and even ice-cream. Can’t you see that, to slay something so pure and defenceless for something you don’t even need is something that is vile, cruel and just outrageous? We’re humans, so why don’t we show some humanity? Why can’t we show some simple respect to life? If life matters to humans, why can we allow these innocent creatures to be murdered in thousands?

A whale’s voice can only be heard if we let it be heard. Without the help of us, it will never ring out over the domineering voice of human. Everything is up to you. If we don’t stop this massacre, human will banish that wordless tune forever.

Listen to the voice of the whale.