New exhibition explores the human story of the Clyde Refinery 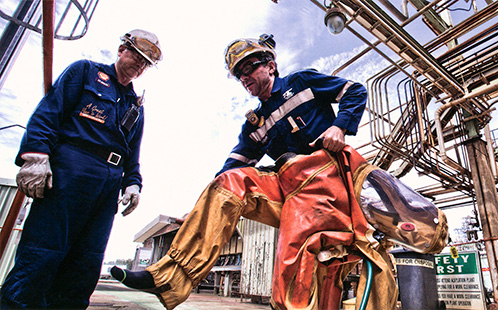 A new exhibition opening next week at the Whitlam Institute located at the UWS Parramatta campus, reveals the very human side of what was the oldest oil refinery in Australia.

Operating since1928, the Clyde Oil Refinery ceased operations in 2012 but at one time, employed more than 300 people.

The exhibition, At Work – Clyde Refinery (1928 – 2012) Parramatta documents this long history and shows how the men and women who worked at Clyde Refinery experienced the evolution of working conditions, safety standards, gendered roles and communication relations within an environment of advancing technology.

What is revealed is their unwavering mateship and ties to the greater Parramatta community.

At Work – Clyde Refinery (1928 – 2012) Parramatta has been curated by UWS Art Curator Monica McMahon and Dr Janine Sager and is supported by Shell Australia.

The exhibition will be officially opened by Mr David Borger, Western Sydney Director of the Sydney Business Chamber on Friday 10 October 2014 at 6pm at the Margaret Whitlam Galleries in the Female Orphan School on the UWS Parramatta campus.

The exhibition will be open to the public on Thursday 16 October.