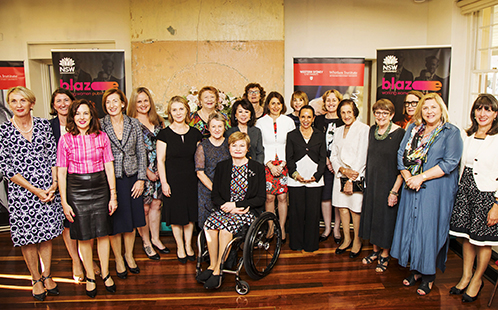 Blaze: Working Women, Public Leaders shares stories of women from our history who were leaders and trailblazers in the NSW public sector, as well as the contemporary perspectives of women leaders in public roles.

Leanne Smith, Director of the Whitlam Institute, said “The Whitlam Institute is honoured to host this celebration of exceptional women, who are now being recognised through this exhibition as trailblazers of our past and future.”

“It’s fitting that the exhibition is held in the Margaret Whitlam galleries - the Whitlam legacy of advancing gender equality is of course significant, but so too was the professional contribution of Margaret herself. Mrs Whitlam is recognised here for her social work as well as her trailblazing role as the Prime Minister’s wife, advancing those causes most important to Australian women,” said Ms Smith.

Curated by Dr Penny Stannard of NSW State Archives, the exhibition will run from 26 April – 27 July at the Margaret Whitlam Galleries in the Female Orphan School.

Those featured in the contemporary profiles include a number of NSW public service leaders with strong ties to Western Sydney, including: Dorothy Hoddinott AO, Principal of Holroyd High School; Jane Spring, an elite sportswoman who is a member of the Western Sydney Local Health District Board; and Dr Teresa Anderson, now Chief Executive of Sydney Local Health District, who worked for many years at Liverpool Hospital. Other individuals’ careers feature interesting links to the Whitlam legacy.

Exhibition open to the public – 24 April to 27 July 2018 | Thursdays and Fridays 10 am to 4 pm | Saturday 12 May and Saturday 14 July 11 am to 4 pm
The Whitlam Institute at the Female Orphan School at Western Sydney University | Parramatta South Campus | Corner James Ruse Drive and Victoria Road, Rydalmere NSW 2204 |

The vision of the Whitlam Institute is to be a nationally significant institution delivering distinctive, bold and inspiring policy research and programs. Our work encourages common ground, inclusive national identity and civic engagement for all Australians.

We have a nation-building agenda that will (in Gough’s words) “…help the great and continuing work of building a more equal, open, tolerant and independent Australia”.
We build on the great Whitlam legacy to continue Gough Whitlam’s energetic and progressive approach to reform of government, policy and society. We’re seeking new ways to empower Australians to be active participants in democratic life, and we have a particular interest in the civic engagement of young people.

We value our place in Western Sydney and our contribution to the intellectual and cultural life of our local communities. This complements a national agenda for inclusive public policy, informed by principles of social justice and social democracy.