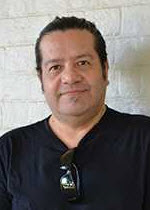 Dr Garrido was signed to Warner Chappell Music. He is a bassist, composer and producer who has worked with some of Australia’s top musicians and producers such as The Catholics, The Party Boys, Disco Montego, Peter Dawkins and David Hemming.

Dr Garrido is currently signed to a publishing contract with BMG. He is a member of Centre for Elite Performance, Expertise and Training (Macquarie University). Dr Garrido has been working on a research project that looks at Syrian musicians in Berlin. This is also part of a new album recorded with Berlin’s top Oriental and German musicians. Dr Garrido’s new project 'Viaje a Chiloe' was mixed in Berlin. Dr Garrido is writing a book for Routledge on popular music performance with professor David Cashman. Dr Garrido is part of the Moviolas, an audio-visual ensemble led by professor Philip Hayward.

Garrido, W 2015, Album “Dark Shadows” by The Moviolas: Composer, producer and arranger, distributed through Bamboozle and HIGHRESAUDIO. All music published though BMG Publishing.