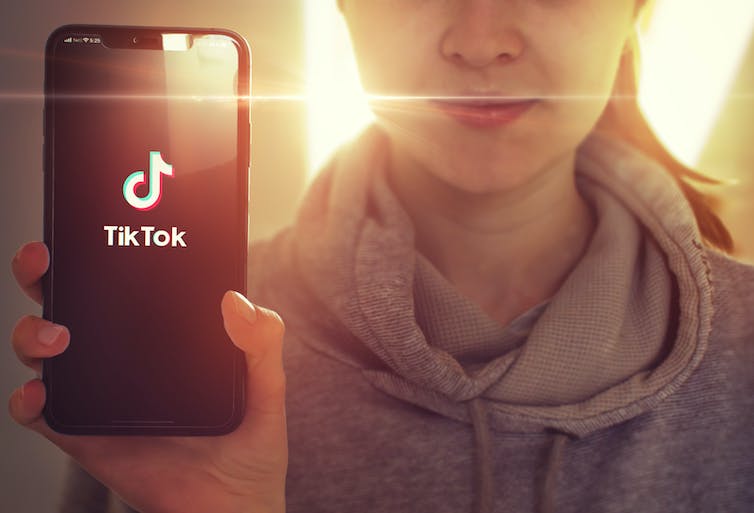 But does this mean your children who use this app are at risk? If you’re a parent, let me explain the issues and give you a few tips to make sure your kids stay safe.

Never has an app for young people been so popular. By April this year the TikTok app had been downloaded more than 2 billion times worldwide (opens in a new window).

The app recently broke all records for the most downloaded app (opens in a new window)in a quarterly period, with 315 million downloads globally in the first three months of 2020.

Its popularity with young Aussies has sky-rocketed. Around 1.6 million Australians (opens in a new window)use the app, including about one in five people born since 2006. That’s an estimated 537,000 young Australians.

Like all social media apps, TikTok siphons data about its users (opens in a new window)such as email address, contacts, IP address and geolocation information.

TikTok was fined $US5.8 million (opens in a new window)(A$8 million) to settle US government claims it illegally collected personal information from children.

Read more: China could be using TikTok to spy on Australians, but banning it isn’t a simple fix (opens in a new window)

Just days ago the Trump administration signed an executive order to seek a ban on TikTok (opens in a new window)operating or interacting with US companies.

There is no hint of this stopping our TikToking children. For them it’s business as usual, creating and uploading videos of themselves lip-syncing, singing, dancing or just talking.

The most recent trend on TikTok – Taylor Swift Love Story (opens in a new window)dance – has resulted in more than 1.5 million video uploads in around two weeks alone.

But the latest political issues with TikTok raise questions about whether children should be on this platform right now. More broadly, as we see copycat sites such as Instagram Reels (opens in a new window)launched, should children be using any social media platforms that focus on them sharing videos of themselves at all?

The pros and cons

The TikTok app has filled a genuine social need for this young age group. Social media sites can offer a sense of belonging to a group (opens in a new window), such as a group focused on a particular interest, experience, social group or religion.

TikTok celebrates diversity and inclusivity. It can provide a place where young people can join together to support each other in their needs.

Some of these videos are funny, some include song and dance. The World Health Organisation even posted its own youth-oriented videos (opens in a new window)on TikTok to provide young people with reliable public health advice about COVID-19.

The key benefit is the platform became a place where young people joined together from all corners of the planet, to understand and take the stressful edge off the pandemic for themselves and others their age. Where else could they do that? The mental health benefits (opens in a new window)this offers can be important.

Another benefit lies in the creativity TikTok centres on. Passive use of technology, such as scrolling and checking social media with no purpose, can lead to addictive types of screen behaviours (opens in a new window)for young people.

Whereas planning and creating content, such as making their own videos, is meaningful use of technology (opens in a new window)and curbs addictive technology behaviours. In other words, if young people are going to use technology, using it creatively, purposefully and with meaning is the type of use we want to encourage.

Like all social media platforms, children are engaging in a space in which others can contact them. They may be engaging in adult concepts that they are not yet mature enough for, such as love gone wrong or suggestively twerking to songs.

Read more: The secret of TikTok's success? Humans are wired to love imitating dance moves (opens in a new window)

The platform moves very quickly, with a huge amount of videos, likes and comments uploaded every day. Taking it all in can lead to cognitive overload. This can be distracting for children and decrease focus on other aspects of their life including schoolwork.

So here are a few tips for keeping your child safe, as well as getting the most out of the creative/educational aspects of TikTok.